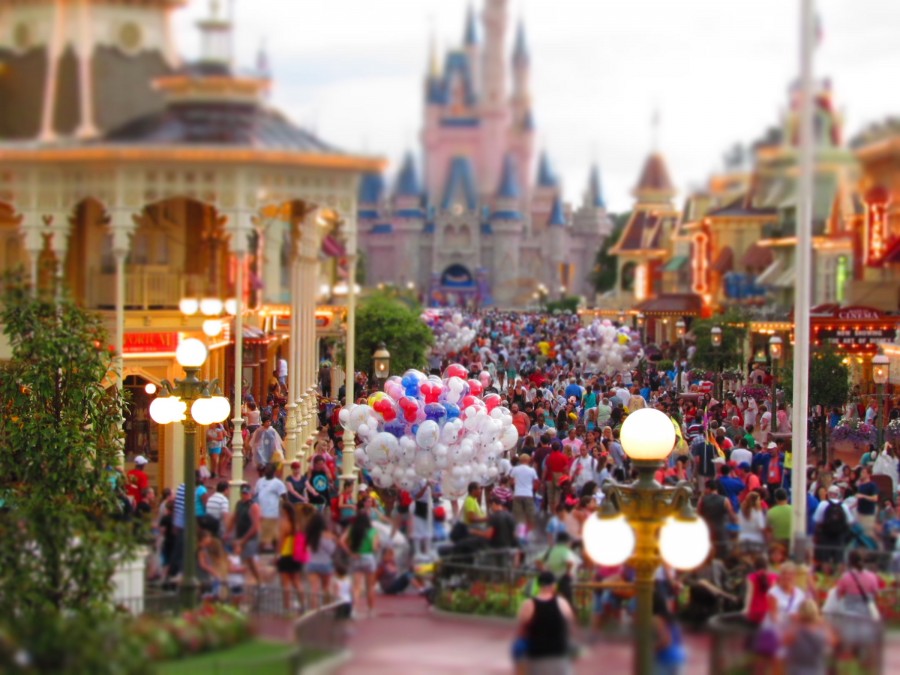 There is a ton of change going on a Walt Disney World right now. Let’s look just at dining for a moment. 2015 has been a big year so far for dining at Walt Disney World. Starbucks opened locations at Disney’s Hollywood Studios and Disney’s Animal Kingdom. Also new to Animal Kingdom is Harambe Market. At Polynesian Resort, Trader Sam’s Grog Grotto opened and the Dole Whip got its own window.

Downtown Disney is also in the middle of transforming to Disney Springs and with it comes The Boathouse, which opened in the spring. Also new to the area are the delicious Vivoli Gelateria and Tea Traders Cafe by Joffrey’s.

So what’s coming in 2016 (and beyond)? There’s a lot that’s already been announced by Disney:

New Castle Courtyard and Gardens (2015) – The long running improvements in the central plaza / hub of the Magic Kingdom will wrap up later this year. Not only will there be improved fireworks viewing, the show sound and lighting will be better for the castle stage shows.

Frozen attraction coming to Epcot (2016) — Lovable sisters Princess Anna and Queen Elsa from the Oscar-winning animated blockbuster hit “Frozen” are taking guests on a new journey to Arendelle. The new attraction, which is coming to the Norway pavilion at Epcot, will immerse guests in many of their favorite moments and music from the film. A royal greeting location where guests can meet Anna and Elsa is also in the works.

Sunset Kilimanjaro Safaris (Spring 2016) — The popular Kilimanjaro Safaris attraction at Disney’s Animal Kingdom theme park will be extended for a new nighttime adventure. Guests will travel through the African savanna amid the magically extended orange glow of the setting sun and discover two species new to the attraction: African wild dogs and hyenas.

“Rivers of Light” (Spring 2016) — “Rivers of Light” is an innovative experience unlike anything ever seen in a Disney park, combining live performances, floating lanterns, water screens and swirling animal imagery. “Rivers of Light” will magically come to life on the natural stage of Discovery River, delighting guests and truly capping off a full day of adventures at Disney’s Animal Kingdom theme park.

Discovery Island enhancements (2016) – There will be addition enhancements around Discovery Cove leading to a new night time celebration with digital projections on the Tree of Life and performers on the street.

Star Wars Launch Bay (2015) and Star Wars: Seasons of the Force (2016) While we wait for a larger Star Wars presence we will see some early signs of The Force beginning at the end of this year with Star Wars Launch Bay, an interactive experience where guests can explore the upcoming film, Star Wars: The Force Awakens. In 2016, we’ll see a new Star Wars festival that includes a reimagined Jedi Training Academy, a new seasonal event Season of the Force, a never-before-seen Star Tours – The Adventure Continues experience.

Skipper’s Canteen (2015-16). A new restaurant is coming to Adventureland at the Magic Kingdom. The Skipper’s Canteen restaurant will featuring foods from around the world and shares a kitchen with Liberty Tree Tavern allowing it to be quick service at lunch and sit down at dinner, similar to Be Our Guest. The Magic Kingdom is desperately in need of more dining capacity, so this should help.

Pandora — The World of AVATAR (2017) —Disney in collaboration with filmmaker James Cameron and Lightstorm Entertainment is bringing to life the mythical world of Pandora, inspired by Cameron’s AVATAR, at Disney’s Animal Kingdom theme park. The awe-inspiring land of floating mountains, bioluminescent rainforests and soaring Banshees will give guests a transformational experience they will never forget.

AVATAR Flight of Passage (2017) – This E-ticket attraction, the centerpiece of Pandora at Disney’s Animal Kingdom theme park, will allow guests to soar on a Banshee over a vast alien world. The spectacular flying experience will give guests a birds-eye view of the beauty and grandeur of the world of Pandora on an aerial rite of passage.

Toy Story Land coming to Disney’s Hollywood Studios (201?) — The reimagining of Disney’s Hollywood Studios will take guests to infinity and beyond, allowing them to step into the worlds of their favorite films, starting with Toy Story Land. This new 11-acre land will transport guests into the adventurous outdoors of Andy’s backyard. Guests can experience two new attractions, including a family-friendly roller coaster on the back of Slinky Dog and an aliens saucer attraction. Toy Story Midway Mania! will also add a third track to the existing popular attraction.

Star Wars Themed-Land arriving at Disney’s Hollywood Studios (20??) — a Star Wars-themed land is coming to Disney’s Hollywood Studios, where Star Wars characters and their stories will come to life. Highlights feature two signature attractions, including the ability to take the controls of one of the most recognizable ships in the galaxy, the Millennium Falcon, on a customized secret mission, and an epic Star Wars adventure that puts guests in the middle of a climactic battle.

Transportation improvement – in addition to all the new attractions, dining, and park improvements, Walt Disney World is working on a half-dozen or more major transportation projects designed to make future visits to the resort much easier to navigate. No new monorail trains or tracks have been announced yet. Additionally more technology will help guests know how long it will be until the next bus arrives at their hotel.

Flamingo Crossings – two non-Disney hotels and a small convention center will open here. The goal is to add some capacity for sports teams visiting ESPN WWOS

Evident based changes under construction but not announced:

These items are strongly rumored but not officially announced:

What do you think of the plans for the near future, both announced and unannounced. Which one are you looking forward to the most?

previousVideopolis: “I Just Can’t Wait to be King” from The Lion King – A Cappella.
nextBuilding the new Star Wars Canon, what we know so far