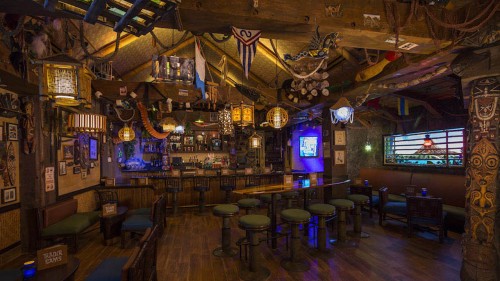 We were lucky enough to have a brief introduction to the Trader Sam’s Grog Grotto by the food and beverage team at Polynesian Village. We even had an appearance by the Tiki Goddess Uh-Oa!

Trader Sam’s Grog Grotto is the latest addition to the newly reimagined Disney’s Polynesian Village Resort. Located off the Great Ceremonial House, the themed lounge will serve exotic drinks and small plates, while offering scenic views of the marina and Seven Seas Lagoon.

Founded by Adventureland’s famous “head” salesman, Trader Sam, the Walt Disney World Resort version will have some similarities to the original Trader Sam’s Enchanted Tiki Bar at the Disneyland Hotel in Disneyland Resort. But magical theming will reflect its new resort location.

1200 artifacts unique to the location and it features more of a 1960s nautical flair than it’s west-coast companion. It seats 51 inside and 80ish out on the Tiki Terrace themed patio. Right now the hours are 4pm to Midnight, but you have to be over 21 to enter after 8pm.

As you can tell from the menu, there are no prices listed for the drinks. But they general cost staring around $12 or more depending on how much alcohol is in them. Collectible mugs are extra. 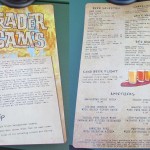 I expect this to be a very popular spot for regulars and conventioneers. As you can tell from the tour, it has a great atmosphere and more details than you can possibly take in in one sitting.

Does Trader Sam’s Grog Grotto seem like something you’ll visit on your next vacation?

previousMarvel’s Agents of SHIELD Recap – One Door Closes
nextTangled: The Musical Heading for The Stage and Sea.