Mistress of All Evil – Book Review

1. Fairest of All: A Tale of the Wicked Queen

2. The Beast Within: A Tale of Beauty’s Prince

3. Poor Unfortunate Soul: A Tale of the Sea Witch

4. Mistress of All Evil: A Tale of the Dark Fairy

5. Mother Knows Best: A Tale of the Old Witch; and

6. The Odd Sisters: A Tale of Three Witches

With the long-awaited release of The Odd Sisters: A Tale of Three Witches – the first of Valentino’s characters to have a book of their own – set to hit shelves this summer, I decided to re-read and review Books 1-4. (See my book reviews of Fairest of All here, The Beast Within here, and Poor Unfortunate Souls here.) If that’s not a countdown celebration, I don’t know what is.

Mistress of All Evil – the fourth book in the Valentino Villains series – is an emotionally charged origin story of Sleeping Beauty’s Maleficent. The tale carries with it a sense of helplessness, probing whether one can ever really change their fate. Valentino pulls at the heart strings taking us back to the old school yard, complete with bullies, exams and treehouse retreats. The comfort of Nanny’s baking and the Odd Sisters’ oddly warm birthday company is no match for the entrenched maelstrom of Maleficent’s existence from day one. When nature itself turns against you, and the good fairies do not appear to be all that good, there is no happy ending. 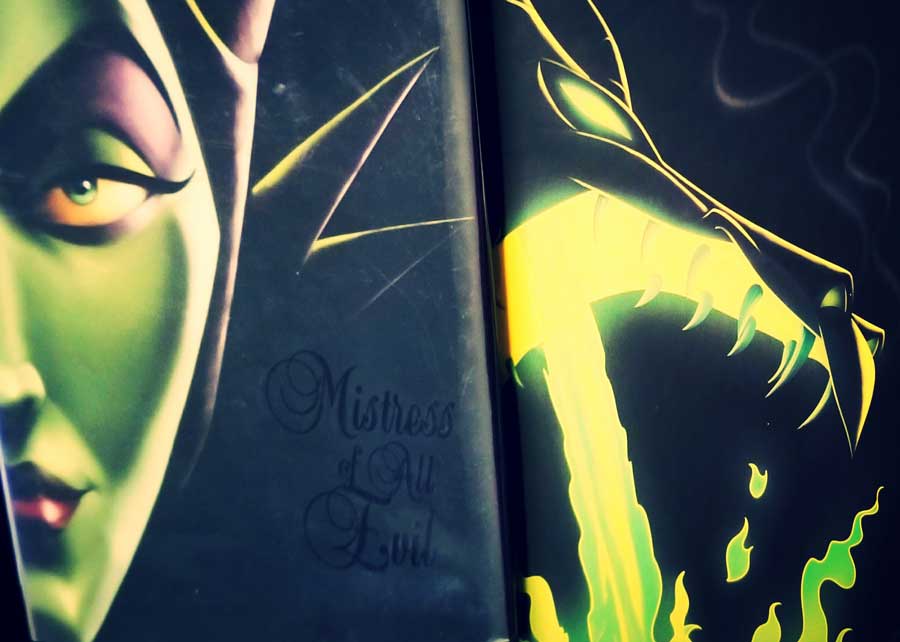 Maleficent is confident but not cocksure like the Beast Prince; lonely, but not self-destructive like the Wicked Queen; powerful, but not greedy like the sea witch. She thrives on reading and learning – knowledge is power. This notion is, however, interestingly juxtaposed with the suggestion that one’s story cannot be unwritten; no tale untold. In the land of dreams, Aurora contemplates this very issue, considering that “[i]t was strange having so much knowledge at once and having so little power to direct her own fate.” The same can be said for Maleficent. She is a bookworm with an unquenchable curiosity and many magic materials at her disposal, and yet her power is limited.

I was struck by the recurring theme of three’s in this book: the sisters three; Flora, Fauna and Merriweather; Snow compartmentalizing her mother into three different women; and the three types of books: spell books, fairytale books and history books. Each set of three plays a significant part in Maleficent’s story, but also more generally in developing character roles. The books lead Circe to learn one of the Odd Sisters’ biggest secrets; Snow and her mother potentially discover a new type of enchantment; and the spell books frame Maleficent’s learning. Three’s clearly comprise of secrets, wisdom and magic.

As I suggested in my Poor Unfortunate Souls review (read it here), Mistress similarly demonstrates that magic is not a simple, straightforward business. As a result, we see new complexities arise, particularly as they relate to relationships. Although oft riddled with heartbreak, the reader is encouraged to reflect on what it means to be family and what one is willing to do to protect his or her family. To say that Maleficent’s “intentions were good…” rings true and yet the crux of the story lies in those three telling dots. We also learn more about the relationship between witches and fairies, particularly through Nanny and the Fairy Godmother. (The Fairy Godmother’s appearance makes me hope a Lady Tremaine story is going to bibbidi-bobbidi-boo its way into the villains series soon!) The explanation of a fairy’s role as charge to a princess (or a Pinocchio) was, I thought, particularly crafty, along with the significance of turning sweet 16. (Those Valentino tie-ins will keep me coming back every time.)

Despite being a somewhat compelling origin story, particularly seeing the Dark Fairy as an inquisitive little girl which I really loved, I felt this villain’s tale was far removed from the Disney film for three reasons:

While I delighted in further evidence that Aurora is smart and intuitive (“she had always sensed something magical” about her Aunt Flora, Aunt Fauna and Aunt Merriweather, and I immediately recalled her line from the film, “what are you three dears up to?”), we hear almost nothing of King Stefan, his queen (though she is given a name – Leah) and Prince Philip. King Hubert is not mentioned despite providing welcome comedy and fun dialogue in the film.

I recall in Fairest of All feeling totally transported to the castle, and Valentino’s majestic descriptions of Snow White and her surrounds continue in this book, but I just was not as captured by Maleficent’s story’s settings so felt a little bit disconnected. There were no famous object backstories (I thought the spinning wheel was ripe for the taking), and I am also not entirely convinced of the relationship between Maleficent and Aurora (mainly because I am not sure where that leaves King Stefan and Queen Leah). Finally, I struggle to see Merriweather as the ringleader of the good fairies. To me, Flora calls all the shots, though I concede that Aurora’s predominantly blue dress may suggest otherwise.

So, my stubborn Sleeping Beauty feelings got the better of me and I felt a little less invested in this story. Though, there is still much to love including the following, which is perhaps my favorite passage in the book:

“Grimhilde’s love for her daughter sat in Maleficent’s stomach like a cold stone. It caused a tingling sensation that told Maleficent this was something she should feel. An inkling that this was something that would have touched her heart. But she pushed that inkling down with the others that lived in the pit of her stomach. She imagined they all looked like broken pieces of headstone. She wondered how they all fit together there and how it was possible for someone so small to carry so much. Sometimes she felt the weight of them would crush her, yet it never did. She supposed everyone carried their burdens there. It seemed like the perfect place – close to the heart, but not dangerously so.”

Previously: A TV Show on Disney+ will be based on Serena Valentino’s Disney Villain novels.