Fairest of All: A Tale of the Wicked Queen – Book Review 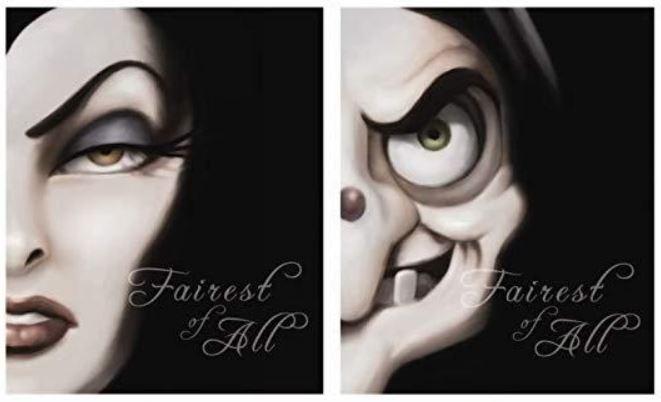 With the long-awaited release of The Odd Sisters: A Villains Book – the first of Valentino’s characters to have a book of their own – set to hit shelves this summer, I decided to re-read and review Books 1-4. (See my ARC review of Mother Knows Best here.) If that’s not a countdown celebration, I don’t know what is.

Fairest of All is one version of the story of the Wicked Queen from Disney’s Snow White and the Seven Dwarfs. Though the Queen was not always wicked, Valentino’s plot beautifully illustrates how the Queen became “so contemptuously vile.” The story is indeed a tale of love, loss and magic, but it is also one of vice, temptation and addiction. A fairytale story set in the trenches of reality.

From the very first chapter, the story engages the senses. You can see the lavish tapestries depicting images of knights in battle and lovely maidens gazing at their beauty in reflective ponds (a charming hint to sinister themes). You can smell the dinner of baked rosemary bread, sweet butter, hearty cheeses, roasted pork and sweet potatoes as the family enters one of the smaller dining halls. You can feel the coziness of the morning room; the cushions and warm furs laid before the fire.

The events of the story align with those of Disney’s classic film and they are so well-paced that they give you a coherent sense of the bigger picture. We learn that Snow’s meeting with her prince by the well originally captured in the film is not their first meeting, nor the first time the Queen learns of their relationship. We learn that the pierced-heart box is much more than an intended home for Snow’s heart. We learn that the significance of an apple does not just come from a dusty old spell book. We learn that the Magic Mirror is so much more than one who reports on the fairest maiden in the land.

We initially sympathize with the Queen’s intense loneliness and her battles with insecurity. Her desire to be loved and her need for approval can be all too relatable. From being insistent that no one see her without painted face and coiffed hair, to her spiral into paranoia, sickness and all-consuming vanity (aided by her nightmares and those “morbidly appealing” Odd Sisters) you are not sure where and when the Queen reaches the point of no return. You just know that to be terrified, comforted and exhilarated by the heinous deeds she authors is to have a devastating effect on anyone’s sense of humanity. The Queen’s very being showcases a grotesque manifestation of despair and power.

The tale also weaves classic fairytale stories among the original plot. Tales of dragons and knights; family dinners and outings are things many children are familiar with, royalty or not. When storytelling to Snow, the Queen also alludes to Maleficent’s story, which is a subtle but important foreshadowing of Villains stories to come.

Book 1 in the series has always been my favorite and remains so… so far. I give it a solid, unabashed five stars. Here’s to Books 2-7 and hopefully an infinite number more to come!