With the long-awaited release of The Odd Sisters: A Tale of Three Witches – the first of Valentino’s characters to have a book of their own – set to hit shelves this summer, I decided to re-read and review Books 1-4. (See my book review of Fairest of All and The Beast Within.) If that’s not a countdown celebration, I don’t know what is.

Please note: this review CONTAINS SPOILERS. Do NOT read ahead if you have not read Books 1, 2 and 3. 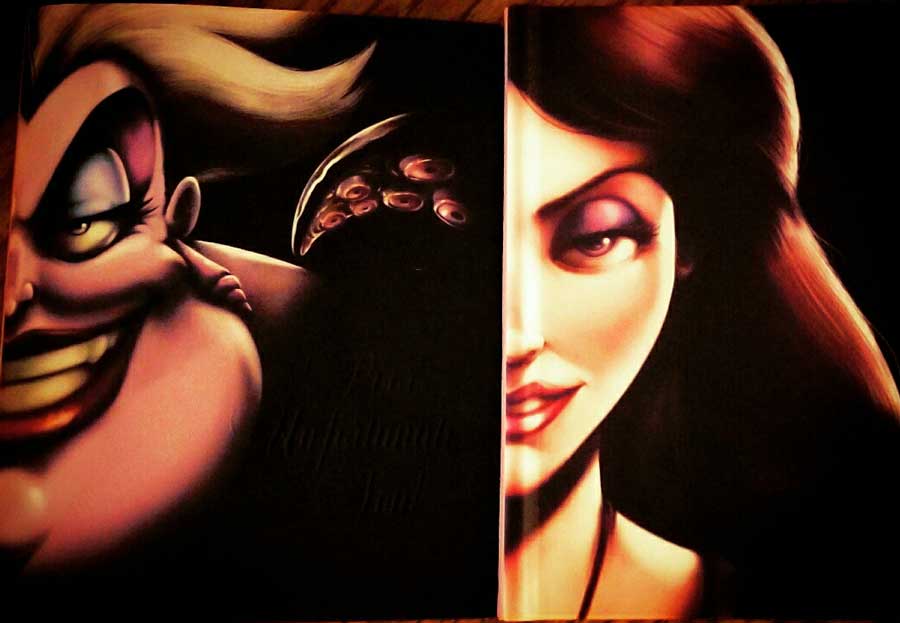 Poor Unfortunate Soul – the third book in the Valentino Villains series – gives Ursula her very own voice with which to tell her very own story. The tale of the cheeky sea witch, maker of deals, and uncrowned queen of the Unprotected Waters challenges the reader to think about what he or she values and how those values might manifest. It also advances readers to the next level of villainy: detestation for human failings, vengeful destruction and “divine hatred.”

In many respects the lessons in this book go against the grain of traditional fairytales, advocating instead for being true to oneself and embracing what others might perceive as imperfections. Ursula is most comfortable in her octopus-like skin rather than her human Vanessa form or any other form bestowed upon her by others. Tulip has learned a lot from her first romantic ordeal and strives to be stronger, less generically physically attractive, and less giggly.

These self-love lessons, however, come at a cost. Ursula is forced to balance the power she feels in her true tentacled form with the dark power arising from her “deep, penetrating sorrow” that seeks to possess her. She is comfortable in herself and in her nightmarish revenge. It is strangely comforting to know that achieving balance, whether in the world of mortals or magic, is not particularly easy (and not always successful).

I thoroughly enjoyed my immersion into magic in this book. Valentino invites the reader to begin exploring the many different levels of magic and power possessed by the characters in a way that we had not seen in books one and two. Circe has great power and great control over her power; [SPOILER] Pflanze has more of a slowburn magic requiring lengthy recuperation time; [SPOILER] Nanny’s power is gradually coming back to her after a considerable hiatus and is delicately juxtaposed with the power wielded by Circe and Pflanze. The Odd Sisters’ reminders that “fire and water don’t mix” also give the reader some insight into the likely clash of curses between Ursula and Maleficent. Magic is not a simple, straightforward business.

While playing out Ursula’s “Poor Unfortunate Souls” scene from The Little Mermaid was not, in my view, necessary (I felt that it detracted from Valentino’s creative prowess), it did provide continuity for the film and story plots. The lyrics are irrefutably fabulous and denying Valentino’s Ursula her debut might have pulled her too far away from The Little Mermaid for young readers. This scene was also a challenge for Valentino who did not have to contend with musical numbers for the Wicked Queen or the Beast.

In any event, I love the more subdued tie-ins – [SPOILER] like Circe as one of Ursula’s minions, eventually set free to rise out of the skeleton garden as the minions did in one of the final scenes of the film. I always wondered what some of the minions’ stories were beyond “this one longs to be thinner, that one wants to get the girl.” Such execution is also suggestive of the Valentino story playing out right before your very eyes in the film, not just behind the scenes where the real (Odd Sisters’) magic happens.

I also have a soft spot for the backstories of famous objects from the Disney films. In Fairest of All, I loved the story of the pierced-heart box. In this story, Ursula’s shell necklace carries more baggage than just Ariel’s voice. I have probably spoiled too much already, so to uncover these and other nifty histories, snag yourself a copy of Poor Unfortunate Soul! In the meantime, I leave you with my favorite quote from Book 3:

“I’d rather spend my days reading and learning something of the world! Not trapped away in some man’s castle, at his beck and call!” – Tulip