Disney closing at least 20% of its Disney Stores

The Walt Disney Company, as it turns out, is not immune to the shift to e-commerce that’s been accelerated by the pandemic. In an announcement today, the Mouse House said it would be closing one-fifth or more of its brick-and-mortar Disney Store locations in 2021.… Read More »Disney closing at least 20% of its Disney Stores Disney continues to rollout its new concept Disney Store with the latest opening in Syracuse, NY and one in Rome, Italy. It also made news recently by agreeing to accept Apple Pay at some Disney Store locations (as well as Walt Disney World). This NFC… Read More »Disney Store to add Apple Pay NFC mobile payments

Like many children, Space Mountain was my first big roller coaster. I remember how nervous I was as I wound my way through the queue at Disneyland. The show in the theater below helped distract me, as did the sneak preview windows in the queue.… Read More »3-2-1 Limited Edition Space Mountain T-shirts Now Available Online

The Disney Store to Celebrate 25 Years of Magic Tomorrow

If there is one thing about Disney’s merchandise program I’m constantly amazed at, it’s how they manage to screw up the limited edition merchandise events so frequently. If they didn’t have a brand with such a strong history, I don’t think people would put up… Read More »Disney Store Offers Make-up Discount

The Disney Store Reopens in Orlando

After a few months of refurbishment, the Florida Mall location of The Disney Store has reopened under the new interactive play themed model. It’s been open for a few weeks now, so we dropped by to see how things are going.

The new look of the store resembles the more modern lines shoppers are used to seeing in malls these days. Inside there is a boy side… and a girl side. 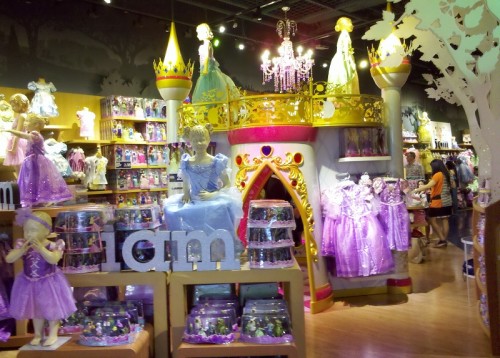