In just under a year, the Marvel Cinematic Universe will get a lot stranger. Doctor Strange, one of the brand’s most enigmatic heroes, will take to the big screen with Benedict Cumberbatch in the title role. Marvel officially announced the start of production today and,… Read More »Marvel begins filming on “Doctor Strange” movie 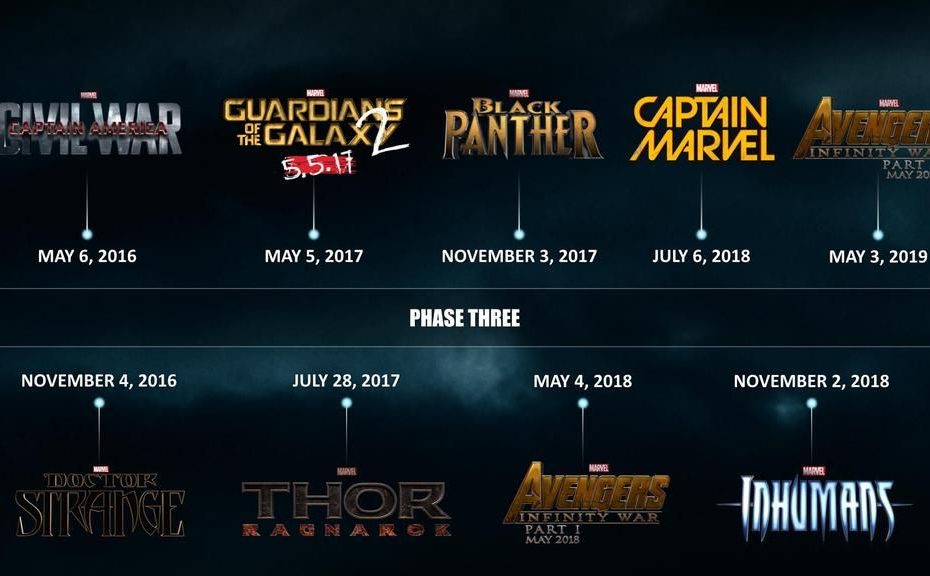 Last year, Marvel held a surprise press conference to unveil their entire Phase 3 line up of movies. This is what it looked like: Then, Marvel and Sony announced that they will be working together with Spider-Man. Sony will still make the movies with help… Read More »Marvel Cinematic Universe Growing Pains

There’s been some interesting tidbits coming out of the Marvel Cinematic Universe lately. Benedict Cumberbatch recently spoke to The Wall Street Journal about, among other things, his role as Dr. Strange. On the movie: “It’s very different, it’s an Astral Plane. There’s a huge new… Read More »Marvel News Roundup

Marvel Studios had decided to go bold by setting dates for its upcoming movies through Spring 2019, which will take them into the start of Phase 4 of the Marvel Universe.

So what other films could Marvel plan to release?

Well, The Avengers sequel is coming three years after the first one, which means The Avengers 3 could occupy one of the 2018 dates. Doctor Strange already has a director, so that might get the second 2016 date. Thor 3 is also in the pipeline, so that will probably get one of the 2017 dates, as will a most likely sequel to Guardians of the Galaxy. Marvel is also said to be developing standalone films around Black Widow and Black Panther. That leaves one slot unaccounted for.

Hopefully we’ll know more once Marvel has its big reveals at this year’s San Diego Comic-Con.

Below is the full slate of Marvel releases scheduled through 2019:

There’s been a lot of talk around the Marvel Universe lately, however, most of it falls into the category of rumors for now. What has been confirmed is that Rosario Dawson has been cast in an unnamed role in the Daredevil series on Netflix. Her… Read More »Marvel News Roundup