Editor: Please welcome back guest author Brittany who gamely stepped in last night when our normal reviewer went down with an illness. And we are down to Five….. It was a night of perfect scores for one celebrity….so who do you think had the flawless… Read More »Dancing With The Stars Week 8 Performances – And then there were Five

To the delight of Beliebers everywhere, the night began with a performance of “Never Say Never” by Justin Bieber. Then, Carson (yay!) returned to talk to some fans and the judges. This week’s encore dance was awarded to Team Paso, who gave us another fabulous… Read More »Dancing With the Stars Week 7 Results Show – No Treats for David

J.R. Martinez, Dancing With The Stars contestant, Just Named Grand Marshal of next Tournament of Roses 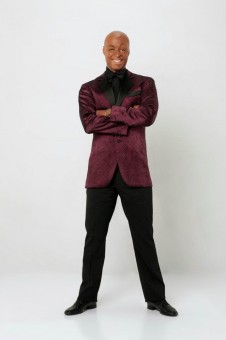 Congrats to Iraq War Veteran and “Dancing with the Stars” contestant J.R. Martinez who will be riding down Colorado Boulevard and tossing the Rose Bowl Coin on January 2, 2012 as the Grand Marshal for the Pasadena Tournament of Roses. Martinez will serve in honor of all wounded servicemen and servicewomen. The tournament theme this year is “Just Imagine…”, which fits well with Martinez’ experience on DWTS. He is definitely encouraging people to reach higher and try harder.

“When I was first asked to be Grand Marshal of the Tournament of Roses festivities by President Jackson, I was speechless,” said Martinez. “To be able to participate in this iconic American tradition on New Year’s Day is something I could only imagine. I believe everything happens for a reason and I’m grateful the events of my life have provided me with the opportunity to share my message of hope and possibility on New Year’s Day.”

“J.R. Martinez is an inspiration to us all and a natural fit for our theme ‘Just Imagine…,’” said Rick Jackson, president of the Tournament of Roses. “J.R. is not only a courageous and engaging role model for us all but has dedicated himself to helping not only servicemen and servicewomen, but all Americans facing challenges. His outlook on life is admirable and we couldn’t be happier to have the chance to celebrate the New Year with him as we entertain the millions of fans around the world during the Rose Parade and Rose Bowl Game.”

Dancing with the Stars, Week 6 Recap

Hi there everyone and welcome to this week’s Dancing with the Stars Recap. Last week we saw Carson Kressley get kicked off the dance floor, this week DWTS celebrated the Great White Way and Broadway.

During Rehearsal Week, Rob Kardashian’s mother Kris Jenner dropped by the dance studio to offer Rob some words of encouragement. Jenner said Rob has gone from a boy to a man and she was proud of him. She said Rob used to be a shy boy who could never do something like this. Jenner said Rob has a lot of competition against people who are used to being competitive and added it’s time for Rob to do the job and it’s time to kick some ass and he can’t be nice anymore! Such mother’s love, she kisses her son with that mouth? J Rob said he was ready to “kick some butt”, glad to see his language was cleaner than his mom’s!

Rob and his dance partner Cheryl led the show off with the Cha-cha-cha to Walk like a Man from Jersey Boys (p.s. It doesn’t get any better than Frankie Valli and the Four Seasons!). Rob opened the song with a nice little butt shimmy and then gave the crowd some big hip thrusts. He displayed nice footwork and technique but seemed a little too focused on technique and was a bit stiff throughout the dance.

Judge Len said it was clean and precise and good timing but the Cha-cha-cha has got to show rhythm and to Len there was no rhythm tonight and was a bit “stiff and starchy (Reminder to self: pick up my dry cleaning tomorrow). I must be getting better at this; even I recognized Rob seemed stiff. Judge Bruno said it’s Opening Night on Broadway and he has to take it on full board from the beginning. He added the dance was adequate but didn’t have the impact or power it should have and that Rob has to be in charge and more forceful with his movements. Judge Carrie Ann said it wasn’t as great as Rob’s performance last week but she saw much more charisma coming from him than she ever has. She said Rob is right on the cusp of being a man on the dance floor; he’s not a kid, not a man but an adolescent and getting there.

Rob’s overall score from the judges: 22.

The results show began with Val and Peta and two troupe members dancing to the classic Madonna hits, “Like a Virgin” and “Like a Prayer.” Excuse me for a second while I count my rubber Madonna bracelets. The evening’s first results revealed that Ricki and… Read More »Dancing With the Stars, Week 5 Elimination – So Long, Sparkles 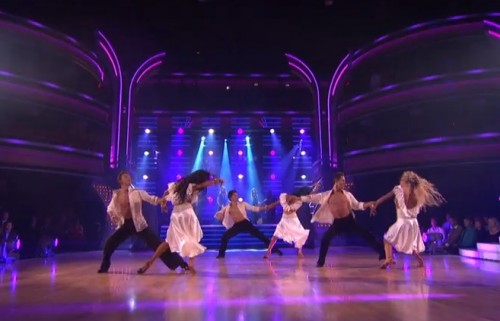