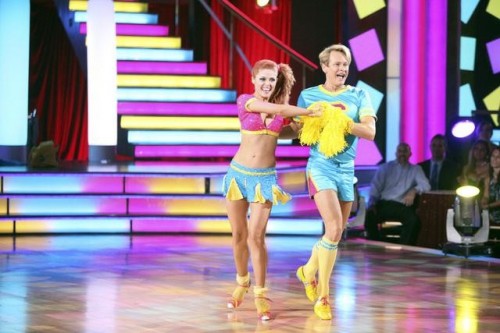 The results show began with Val and Peta and two troupe members dancing to the classic Madonna hits, “Like a Virgin” and “Like a Prayer.” Excuse me for a second while I count my rubber Madonna bracelets. The evening’s first results revealed that Ricki and Derek were safe, but Hope (who took the judges’ critiques hard) and Maks were in jeopardy.

The next segment allowed us behind the scenes to see how the partners’ relationships really work. Then, Kelly Clarkson, the original American Idol, hit the stage to perform her new single. The AT&T Spotlight Performance told us the inspirational story of a young dancer named Charm. After learning of her sacrifice and struggle to keep dance in her life, the role dance has played in her success, and the way she’s using dance to give back to her community, Mark and Derek joined Charm on the dance floor for an energetic routine.

After The Band Perry sang their hit song, the results continued. J.R. and Karina were safe, as were Rob and Cheryl, but despite his new found confidence, David and Kym were in jeopardy. Kelly Clarkson returned to sing another song before we learned that Chaz (who performed on Monday with his fly open-OOPS!) and Lacey were safe, along with Nancy and Tristan. That left Carson and Anna in jeopardy.

In the last moments of the program, David and Kym and Hope and Maks found out that they will dance again next week. Sadly, that means that Carson Kressley and Anna were eliminated. The ballroom will be decidedly less sparkly without him, especially during next week’s celebration of Broadway. I’m sad to see him and his fabulous outfits go.

4 thoughts on “Dancing With the Stars, Week 5 Elimination – So Long, Sparkles”