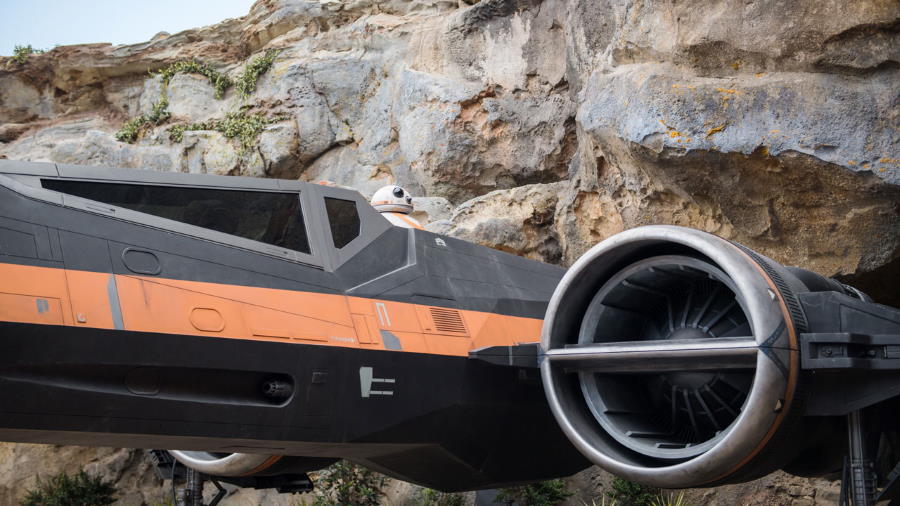 Matt Martin, Creative Executive of Franchise Story & Content at Lucasfilm recently visited Disney’s Hollywood Studios and the planet Batuu in Star Wars: Galaxy’s Edge. While there he got a look inside the Star Wars: Rise of the Resistance attraction.

Martin has a special teaser from Star Wars: Rise of the Resistance – Poe Dameron’s X-wing:

We got a pretty good luck at Poe’s pretty bird when we were given a special sneak peek look inside of Rise of the Resistance during the media event for Star Wars: Galaxy’s Edge grand opening at Disney’s Hollywood Studios. Alas we weren’t allowed to take pictures, at least now Disney has released one we can share.

The X-Wing feels full size and the cockpit hides some special technology that will give guests the feeling Poe Dameron himself is piloting. BB-8, Poe’s round droid, is in the back and ready to assist too. As you can see, Poe has landed his X-wing near the rock cliffs of the Resistance base on Batuu and out of the prying eyes of the First Order.

In Rise of the Resistance, right after you are recruited to join the resistance, Poe and his X-Wing will be your escort into space on a shuttle. As we discovered on our special preview, it’s then that something goes horribly wrong.

It sounds like the attraction will open with no Fastpass initially, just like Smuggler’s Run. If true, that should lead to pretty smooth operational flow as guests move through the queue learning the story of Rise and their place in it before encountering the big show scenes which start right after encountering Poe and his x-wing.