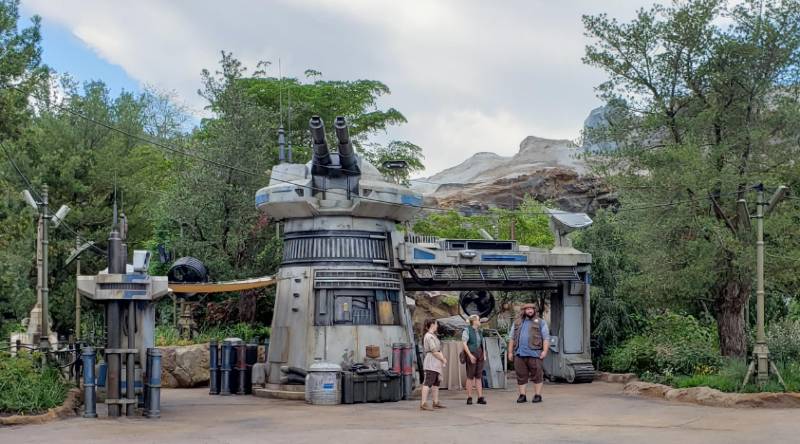 As part of the media preview event for Star Wars Galaxy’s Edge, we were allowed in to see short portion of Star Wars: Rise of the Resistance attraction, which is still under construction. In a day full of exciting moments for me, this took the cake.

This post will describe what I saw and what you will experience on your visit. Naturally there will be spoilers. So deactivate your droids now if you want to avoid any pre-knowledge.

The tour was given by Walt Disney Imagineer Scott Trowbridge. He is essentially in charge of the Star Wars: Galaxy’s Edge expansion and its attractions. Trowbridge explained the ambitious nature of Rise of the Resistance as Imagineers have set out to elevate the theme park attraction to an entirely new level.

The experience begins when you enter the queue for the attraction. Along the way you meet various members of the Resistance to the First Order, like Rey and BB-8, and they recruit you to join the fight.

Once you enlist you are escorted to a troop transport ship to blast off for your first mission. Poe Dameron, the greatest fighter-pilot in the galaxy, is nearby in his full size X-wing. He’ll be your wingman for this adventure.

One exciting thing in a list of exciting things about this attraction, is that the actors from the Star Wars movies will reprise their roles for Rise of the Resistance. What we saw was definitely still a work in progress, but you are definitely immersed in a Star Wars story that feels authentic.

Our special preview started in front of the full-size ITS Troop Transport shuttle. The interior holds about 24 to 32 guests. The transport is shuttled by a familiar Star Wars character – Nein Nunb. The character has gone from co-piloting the Millennium Falcon with Lando Calrissian in the Battle of Endor, to one of the surviving members of the Resistance in The Last Jedi. This is where the first big magic moment happens. The troop transport is intercepted by the First Order and the likes of General Hux. When you are ordered off the ship, you exit via the same door you entered but are on an entirely different ship – a Star Destroyer. 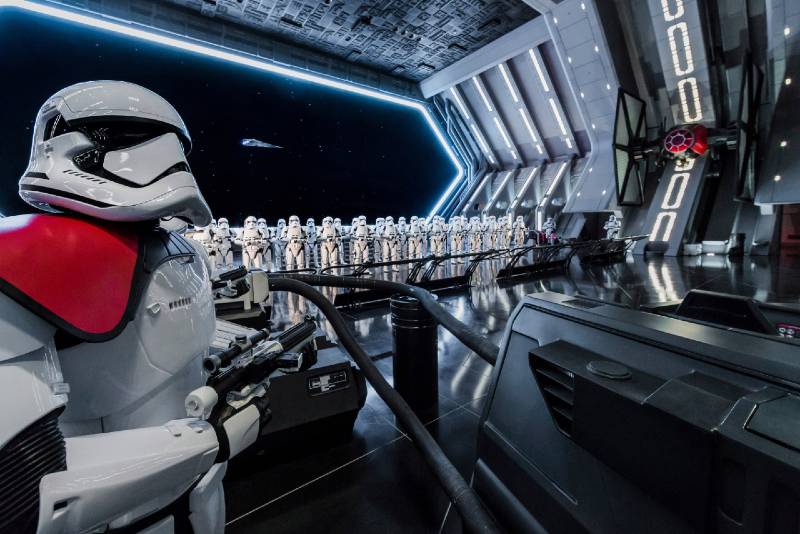 The magic here involves a rotating turntable, but the effect is powerful. When you step off the shuttle, you are entering the room pictured above. It’s full of oppressive looking storm troopers and a handful of First Order officers. There’s a visceral feeling of fear when those doors first open, perhaps the most amazing sensation I’ve ever had at a Disney theme park.

If you’re of an age when you were able to visit Universal Studios Hollywood and ride the Tram Tour through the Battlestar Galactica experience, you’ll remember seeing the Cylon audio-animatronics that felt like they stepped right off the TV screen and into your life. The effect is like that but plussed up in terms of the number of audio-animatronics.

The room is huge, but we’re told it’s not even the largest room in the attraction. As you can see from the photo, you’ll have a view out into space as well. It really felt like you stepped right into a moment from the movie and Finn and Poe Dameron would be nearby trying to steal a tie-fighter.

From this point you board a trackless Troop Transport that fits 8 guests. Your guide is an R2 unit droid that may or may not be entirely sane. From there you go on an adventure through the Star Destroyer, eventually encountering two full-sized AT-AT walkers plus more thrills and surprises – including Kylo Ren himself. At the end your trackless troop transport will enter an escape pod and you’ll experience freefall as you fall back to the planet Batuu and escape the First Order in a crash landing.

The way Trowbridge and the team at Walt Disney Imagineer has integrated multiple ride systems into a mega story telling moment feels very, very Star Wars. Based on our early preview, we think they might accomplish their goal of resetting the bar for theme park attractions.

Update: We have a new interview with Imagineer Scott Mallwitz which gives a few more previously unknown details about Rise of the Resistance.

Star Wars: Rise of the Resistance will open on December 5th at Disney’s Hollywood Studios and Jan. 17, 2020, at Disneyland in California.