It depends. It depends on the project, the subject and what you’re looking for. There are still new discoveries being made. The work started in Ink & Paint will be a life’s work because I’m embarking on a wider reach in terms of where women were overall in animation. There are new discoveries every day that unlock little doors and little mysteries and little windows that you traverse down and through and it provides a bigger, clearer picture.

It also can depend on whether you have people you can speak to. We have sadly lost so many incredible women artists just within the last handful of years working on Ink & Paint. And I kept thinking, “Oh my gosh, had I started this just even six months sooner or let alone years sooner, I would have had a chance to speak to them.” All of that living history is now erased. So, I’m grateful for the ladies that I was able to find and the firsthand accounts I was able to get to. That was key. And you have to temper that a little bit because sometimes memory fades and families’ interpretations of things – who weren’t there, but they’ve been hearing secondhand stories – is not quite accurate. So, there are things you develop, like what to take in and what to filter and what to search for going forward with a project. As you’re doing this, it unfolds and the trail appears before your eyes sometimes (Laughs) So, it’s an adventure.

Another interesting example is Tinker Bell – An Evolution, which was a seven-year research adventure because while there was a lot written about Walt’s Peter Pan, the story of Tinker Bell required connecting a lot of ‘dots’. Various historians and others really had not given any thought to her. So, I really had to dig for a sentence or two in this book, and a sentence or two in that book to aggregate and piece these things together. It was a giant jigsaw puzzle, and that is true of anything you’re researching, but sadly, more-so for the story of women.

One of the first stops I tried to make was at the Studio Archives and it was there that I eventually began to realize the mountain this was going to be. I requested everything the Archives had on the key films and then requested going through Walt and Roy’s earliest ledgers to find out where they were sourcing a lot of the materials they needed. The ledgers seemed a logical place to go to from the very beginning. And then I said, “I’ll need everything on the Ink and Paint department and the various women there that we know about.”

There were boxes and boxes of things to go through on the films, which was great. I had stacks of ledgers to go through, which was great. But I will never forget the dear lead archivist’s face as he came out and said, “So, this is all we have on women…” It was a folder that had five pieces of paper in it. He was shocked, but I knew what this meant. History is recorded, preserved, written about and archived from a male perspective. So, I decided to think peripherally and went back to the ledgers, extracted the various vendors that we could discern and then circled back into the file system and up popped a few vendor files. One included where they were getting the cels.

From there, we found Hazel Sewell’s correspondence essentially saying “We’re trying to do something we’ve never done before. We need as many cels as you can get us. We have calibrated our paints for a blue cast cell and you sent us pink cells. It won’t work, etc.” So, the material was there, but would have remained lost had we not approached it from this perspective, because history is told and recorded from a male perspective. We had to dig extra hard for it.

Things started wafting up after discovering the Sewell correspondence. It is the classic thing that if you start looking for it, you’ll find it. Though, you certainly must be persistent. Details and information would then come out of the blue, too.

Oh, it was. And I’m very animated (laughs), I get very excited. For example, I was at the Library of Congress doing some research on a completely different subject and I had to make a blanket apology to the librarians because I got very excited and was jumping up and down when I found various things – the opposite behavior of quiet folks going about their business in libraries (laughs).

It is great. Every day is a new adventure with new discoveries and things start coming to you. As a result of Ink & Paint, I put a call out: “…if you or anyone in your family have worked in the industry to be in touch.” The response has been marvelous. We’re finally getting women identified where we would previously have a series of photographs which would break your hearts to have to leave many women as unidentified. I am building a database so that we have these referenced women to be able to cross correlate against other photographs and get them identified to unlock this mystery a bit more.

It was about a five-year journey. I don’t know if I can even give you a sense of the hours. Countless! I mean that in a very unexaggerated way. I had no life for several years. I had to relearn my social skills (laughs). I had to keep the roof over my head so I was still teaching and I had other projects and consulting, but I would schedule work such that I would have 3 or 4 days out of the week designated to being in my pajamas at my computer with my research papers, or doing phone interviews or meeting with families – literally digging under beds and into closets; and sitting down with them and getting their stories and putting it together. It was a way of life for that timeframe and every waking – and even sleeping – moment was applied to it. You’d look at the clock and say, “Oh, 10 o’clock, I’ll just do a few more things.” And then you look up and say, “3 o’clock?! How did that happen?” It becomes absorbing. 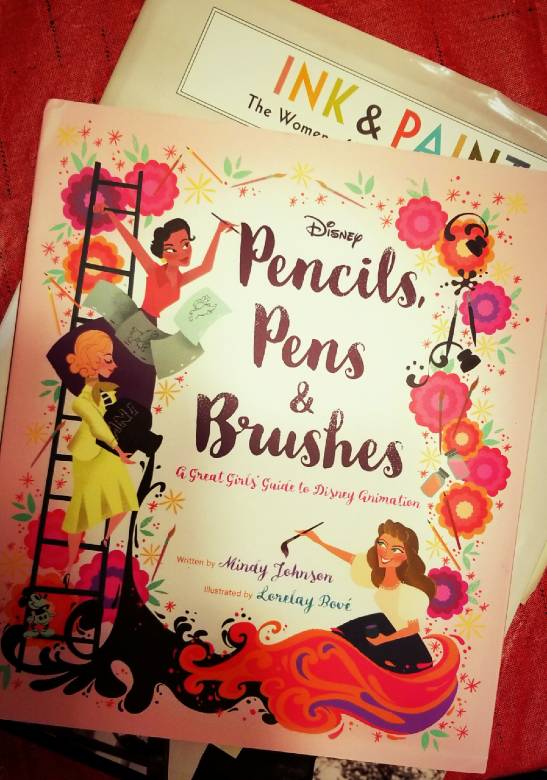 My favorite part was meeting these incredible people. The remarkable people I met along the way includes women frequently in their 60s-100s and their families and getting this great opportunity to be able to tell their stories. They’re powerhouses. That’s what brings me to the Pencils, Pens & Brushes volume. It is really an extension of Ink & Paint because there just wasn’t room in Ink & Paint! It is a wide-brush, surface way of getting you through those 100 years of hand-rendered artistry.

When I submitted the Ink & Paint manuscript and we were in layout, my editor said to me, “So, what’s next?” I said, “Something very light and fluffy, please.” (Laughs) I needed my brain to shift and rest. So, I thought about the fact that there are these incredible stories of these women, and I’d love to do something for young audiences because I would see little ones schlepping that giant book and it would be bigger than them! I realized there’s something here because we have to reach girls at a young age to let them know that, “Here are the role models you can be looking to if you enjoy creating and drawing and animation.”

Just the other day I was a restaurant and there was a family who had two young girls sitting at the table drawing in their notebooks. I asked, “Are you artists?” They said yes, and I replied, “That’s great! How wonderful.” Not that I was trying to sell books, but I continued, “Well, you need to know about these incredible women.” “Really?” They replied. “Wow. But women weren’t doing this…” “Yes, they were!” Even at that young age, those biases are there. So, it’s been a real joy to see young ones get excited and clutch this book, thinking and realizing, “I can do this too!” knowing that they have heroines out there who were not only making these great films, but doing things beyond animation: women pilots, civil rights pioneers and chemists; women starting international clubs because they’re tall. Really incredible backstories that go beyond their work in animation that I just didn’t have room to include in Ink & Paint.

This all just proved that there’s much more here that needs to be presented, showcased and focused on so that we all have an understanding of how we got to where we are with these magical films and the incredible people behind them.

I’m still heartbroken because it was so difficult to decide. It was choosing gems from jewels. We, again, only had room for so many and even this little Pencils volume is brimming because you can see we were squeezing everything in that we could, while still making a wonderful showcase of the great artistry and information. So, I am considering doing a series of volumes for Pencils, Pens & Brushes. That’s why I ended up purposely choosing our earliest women, because there are still so many more! It was heartbreaking having to leave stuff out. We could only include four women animators in there while really there were dozens and dozens of women who were wielding pencils in this early scope of animation.

There were also some new discoveries since Ink & Paint came out. It turns out there were several women WASPs (Women Air Service Pilots) who had gone from Disney and animation into the WASP program. Betty Chamber’s story was just incredible and powerful, though I didn’t get to her until after we had released Ink & Paint. So, I wanted to really expand on it.

I also wanted to make it timeless. Yes, it is geared towards younger audiences, but it’s timeless for everyone. The research continues and the discoveries and incredible stories are still unfolding.

Yes! Lorelay Bové’s artistry is so delicious. You just want to dive into these images. Her work is alive and she captures the spirit and the essence of each of these women. She was my top choice and I was so grateful she responded with, “Yes, I have to do this!”