View from just inside the park gates.

Pandora – The World of Avatar is currently scheduled for a 2017 opening. We’ve learned about two attractions coming to the land, a Banshee ride similar to Soarin’ and a family friendly boat ride. We also got to see the model for Avatar-land at D23 Expo. Unfortunately, unless you have a helicopter or drone, there is no really good way to see the progress of Walt Disney World’s biggest expansion in years.

There are some areas of the construction that can be seen from on-stage at Disney’s Animal Kingdom. These give us a glimpse at the rock work going up around the show building for the two attractions and the famous floating mountains of Pandora. Here are some photos from our recent visit to the park. 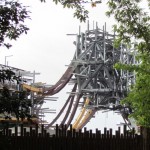 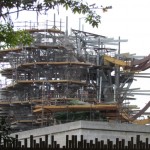 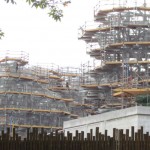 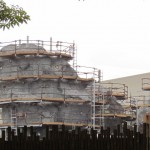 even more rockwork. This is close to getting some color.

I’m king of the world! And by world I mean Avatar World- Coming To Animal Kingdom in 2017 pic.twitter.com/QhRJ6P9Ntl

What are you looking forward to when Pandora – The World of Avatar finally opens?