A new TV Spot with a few additional glimpses from Star Wars: The Force Awakens showed up on the Cartoon Network and Disney Channel this weekend. Obviously, with new scenes there are spoilers if you decide to watch:

Like most other TV spots, we learn a few more small details about the movie. We’ll break down what we think we’re seeing in the new scenes.

First we see Rey walking through a forest (at top) when she comes upon a base or fortress of some kind that’s under attack by Tie-Fighters. This is the first we’ve seen this base in the trailers so far released by Lucasfilm. 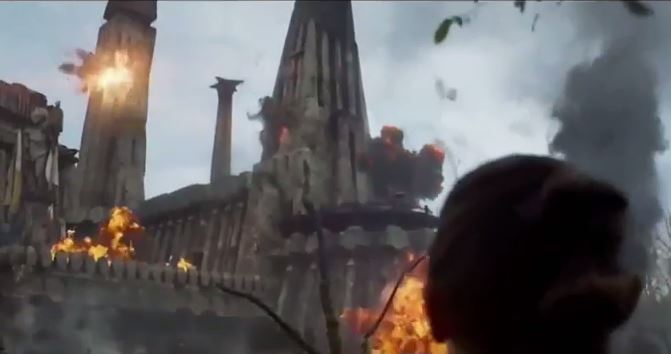 I’m going to hazard a guess that this is a former Jedi temple. I think the towers are very reminiscent of the Jedi Tower of Coursecant and the statue appears to be wearing Jedi robes of some sort.

Then we see a bit more of Finn and Rey’s Jakku based escape from Tie-Fighters attacking the town they’re in. A spaceship explodes cutting off what was probably their means of escape. Looks like they’ll have to find an alternative mode of transport, but more on that later. 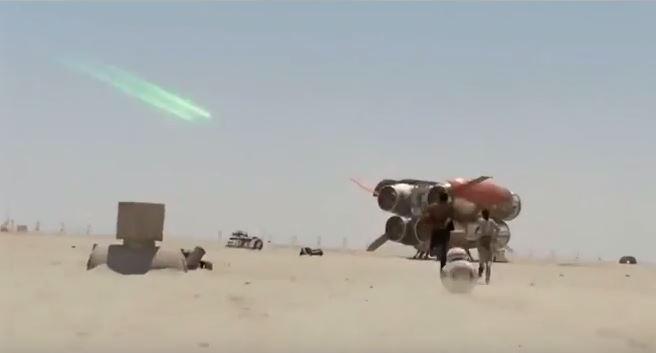 After a familiar clip of Kylo Ren, we see Rey piloting the Millennium Falcon and Finn in a gunner turret as they fly across the desert of Jakku. I guess they found their alternate transport. I wonder who they borrowed it from?

I think we also have a new scene with Kylo Ren doing some Jedi level blocking of blaster bolts and a tell-tale force thrust with his hand. He’s obviously more talented at the Force than a newbie.

Finally, a scene with BB-8 at night in the desert illuminated by an explosion.

I believe all the other clips are repeats. We still don’t have answers to the biggest questions like, what’s the main story, where is Luke, what are the Resistance doing these days? What is the connection between the First Order and Kylo Ren. And there are a lot of characters we haven’t even met yet.

I still think Disney and Lucasfilm are doing a great job giving away just enough to keep our interest. However, with a month to go, what will be next? Usually some behind the scenes featurettes. But we’ll see.

One thing we are getting are sponsor tie-ins. We already had a very cute Duracell commercial, now we have a fun one from Verizon. Looks like they have signal problems even in space.

Which sponsor commercial do you like better, Verizon or Duracell?