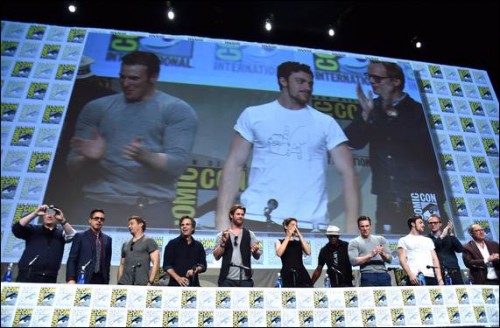 The closing portion of Marvel Movies’ San Diego Comic-Con panel in Hall H on Saturday afternoon was all about next year’s sure-to-be-blockbuster Avengers: Age of Ultron.

Michael Jackson’s “Don’t Stop ‘Til You Get Enough” began playing and the first of the huge cast in attendance was announced by moderator Chris Hardwick. Iron Man himself, Robert Downey, Jr, took the stage first and after a bit of dancing, opened his briefcase and began throwing red roses at the crowd.

All together, now! The cast & crew of @Avengers #AgeOfUltron take over the #HallH stage at the Marvel Studios panel. pic.twitter.com/Iy35qC4zAE

The cast took turns answering questions from Hardwick. RDJ was asked how it felt to be returning in this movie, to which he replied “It just keeps getting better… I’m so excited to be here. We’ve got a real nice movie coming up for you guys next year.” “You’re the best, Robert!” cried one man from the audience. “You’re probably right,” Downey shot back, which caused the rest of the cast to laugh.

There were several jokes made about Chris Hemsworth’s muscular physique, but when asked if there was anything about Thor that he wants to do with the character, he made a nod to the recent comic change and slyly joked, “Turning him into a woman. I don’t want to jinx it, but I think it could be my Oscar. I’m willing to take it on.” (Recently Marvel announced Thor would be changing genders.)

Aaron Taylor-Johnson, new to the cast as Quicksilver, spoke about what drew him to the role: “The characters have such a dynamic between the group. What’s beautiful is you get these characters in the same room and they bounce off of each other.”

Scarlett Johansson, who plays Black Widow, couldn’t be at Hall H due to her pregnancy, but she did a video introduction to the showing of the first footage from Avengers: Age of Ultron.

And the footage sent the room crazy.

It starts with the scene described in the recent Entertainment Weekly story. The group is holding a party and one of the games is trying to pick up Mjolnir, Thor’s hammer. One of the group almost gets it to move, but when Stark says the hammer must be keyed to Thor’s fingerprints, the Asgardian simply replies, “You are all not worthy.”

At that moment, the group is attacked by Ultron and his robot army. There are several scenes of battles around the world, including shots of Tony in his Hulkbuster armor brawling with the mean, green fighting machine. We also see all of the other Avengers in various states of war.

Ultron speaks, and then there is a shot of Captain America’s shield, shattered. The camera pulls back to reveal the Avengers are lying in a pile of rubble, with Stark staring at them saying it was all his fault.

Just when you thought the panel was over, there was one more big reveal…it was finally confirmed that actor Josh Brolin would be playing the villainous Thanos. Brolin strolled onstage wearing an Infinity Gauntlet on his left hand, and demanded a rose from RDJ. When RDJ complied and handed him a purple rose, Brolin responded by eating it, sending RDJ into a giggle fit.

And one with Josh Brolin talking about his reveal at SDCC’14:

Avengers: Age of Ultron will be in theaters on May 1, 2015. Are you more excited to see the film with this big panel at SDCC’14, or are you actually going to need to see the footage to get excited for it?