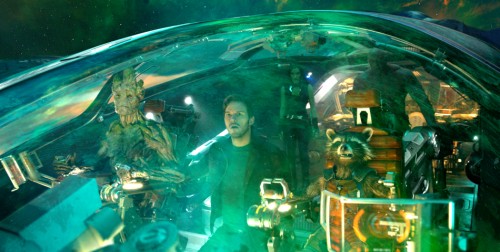 During Marvel’s Hall H presentation Saturday night, the studio slipped in a little humorous video announcement by director/writer James Gunn and Chris “Starlord” Pratt, announcing that a sequel to Guardians of the Galaxy has been greenlit for release on July 28, 2017.

Realizing that millions of his fans couldn’t see the video, Gunn posted the following to his Facebook page:

“So, anyway, just now at Comicon a filmed bit with me and Chris Pratt played where we announced the sequel to #GuardiansoftheGalaxy, which we’re working on to release in theaters on July 28, 2017. Yes, I suppose this is ballsy, considering the film hasn’t even been released yet, but I guess I just can’t let go of that damn raccoon! Please go see Guardians of the Galaxy 1 in theaters next week.”

Just for good measure, Gunn followed up the announcement with the following tweet, reminding us all that the first installment hasn’t been released everywhere yet:

Yes, I’m writing and directing the sequel to #GuardiansoftheGalaxy for theaters July 28 2017. But first go see the first one out next week!

That’s right…they’re announcing a sequel before the first one’s opening weekend box office is in. But from what I’ve heard from those who’ve seen it in previews, Marvel’s betting on a sure thing with a sequel announcement. But the real question about the potential sequel… is a space raccoon safe when he encounters a True Blood vampire at SDCC’14?

Are you planning to see Guardians of the Galaxy in theaters?