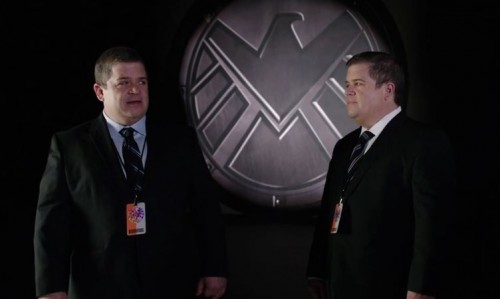 San Diego Comic Con is more than just big movie news. There is a lot of small screen promotion too. From Disney and ABC’s small screen, we were given glimpses into what Season 2 of Agents of S.H.I.E.L.D. will look like, including Lucy Lawless as Agent Hartley (whose first name is either Elizabeth or Isabelle, depending on which article you read).

One of the main villains of the new season will be Daniel Whitehall – a.k.a. Kraken (from the Secret Wars storyline). Rounding out the newly announced cast is Nick Blood who plays mercenary, Lance Hunter.

In a (promo video) hosted by Agent Koeing and…Agent Koeing, the name Bobbi Morse was dropped, which means that Mockingbird will probably be the first superhero to join the show. (Also, the fact that there are now three Agent Koeings leads me to believe that they will be revealed as Life Model Decoys.)

We didn’t get much from Agent Carter other than a synopsis of the show and a Q and A with the cast and crew that didn’t have any big reveals to it. We know that it will share the same themes of Agents of SHIELD, albeit a couple dozen years earlier in history. Howard Stark will play a role. While Carter will be dealing with the loss of Captain America, she’ll also be out in the action, like you would expect. Production starts shortly on the first few episodes.