She started as a performer for Disney Cruise Lines, made a name for herself on American Idol, and was recognized for her considerable talent with an Academy Award for her performance in DreamGirls (among many awards across industries). She’s never forgotten her Disney roots. She was the Godmother for the Disney Dream and had a special on ABC.

Her latest Disney effort is a collaboration with photographer Annie Leibovitz for the latest portrait in the Disney Dream series. It’s titled “Where you always follow your heart” and features Hudson as Tiana from Disney’s animated feature “The Princess and the Frog.” 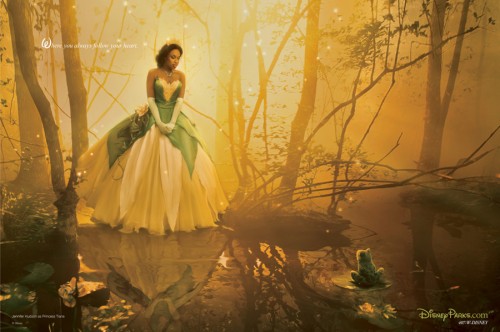 There are a lot of behind the scenes shots over on the Daily Mail. Not Leibovitz’s most creative composition, but I like the colors. I have to say that Duy Truong’s fan created Dream Portrait series has a Princess Tiana that is just as good.