If you’re in the Orlando Area you might have been at the FX Show this last weekend. I wasn’t, but the gamer blog at the Orlando Sentinel was and they caught a really awesome take on our friend Stitch. The Stitch Experiment 626 Artist Series… Read More »Extreme Stitch – Experiment 626 Vinyl Toys 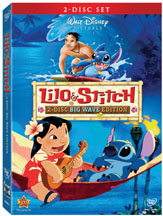 Photos of what looks like to be the next batch of Disney or Muppet Star Wars Mashup toys have hit the net. The Stitch Yoda one is remarkably cute. But all continue the excellent trend started at last year’s event. There is a good chance… Read More »New Disney or Muppet and Star Wars Toy Mashups

Chisaki Watanabe of the Associated Press writes that the Walt Disney Company will partner to produce animation for Japanese television. Disney will work with Toei Animation Co., Madhouse Co. and Jinni’s Animation Studios, said the official, speaking on condition of anonymity to comply with company… Read More »Disney to Make Animation for Japanese TV