With two new mega sized cruise ships coming online (the first in 2011) and two successful west coast trips under its belt, there was little question that Disney Cruise Line would dock a permanent ship on the west coast. The only question was when and… Read More »Disney officially shopping for a west coast home for its Cruise Line

Disney Cruise Line began construction on two new ships today with a steel cutting ceremony at the Meyer Werft shipyard in Papenburg, Germany. Scheduled for completion in 2011 and 2012, the new ocean liners will further advance the company’s one-of-a-kind guest experience and create more family cruise options with a brand guests know and trust.

“When we launched our business in 1998, we recognized a need in the marketplace for a cruise experience created just for families,” said Karl L. Holz, president of Disney Cruise Line and New Vacation Operations. “With these new ships, we are continuing to build upon that vision of providing more families with an unforgettable cruise vacation and the chance to explore new destinations with Disney.”

The first piece of steel cut for the new ships was part of the art deco inspired scrollwork that will grace the bow of the ships. Similar to the scrollwork on the Disney Cruise Line ships, Disney Magic and Disney Wonder, the intricate pattern is reminiscent of the classic ocean liners of the 1930s, designed to reflect the glamour of the golden age of cruising with added touches of Disney whimsy, such as the Mickey Mouse medallion in the center of the design.

Since finalizing a contract with the Meyer Werft shipyard to build the two new ships, Disney Cruise Line and Walt Disney Imagineering have created a truly distinctive design for the new ships. Over the next few years, construction will continue, bringing the design to reality. The design details will be unveiled at a later date.

Holz noted that the fleet expansion will more than double the passenger capacity for Disney Cruise Line. Each ship will have 1,250 staterooms and will weigh 128,000 tons. Similar to the existing ships, Disney Magic and Disney Wonder, the new ships will be purpose built with families in mind, with specially designed areas and activities for each member of the family to allow for both quality time together and wonderful individual experiences. The focus is to provide a setting where families can reconnect, adults can recharge and kids can immerse themselves in worlds of fantasy only Disney can create.

Known for bringing family travel to the cruise market, Disney continues to be a leader in the industry and was recently named the top large cruise ship experience by the readers of Condé Nast Traveler magazine in the 9th annual “Reader’s Cruise Poll.” The Disney Wonder, which sails three- and four-night cruises to The Bahamas, was ranked as the No. 1 cruise ship in the “Large Ship” category. The Disney Magic was also ranked in the top five cruise experiences overall. The Disney Magic primarily sails seven-night cruises to the eastern and western Caribbean and, beginning in the spring of 2010, will embark on a season of limited itineraries exploring Northern Europe and the Mediterranean.

A quick video of the ceremony and the official steel cutting that was attended by Mickey Mouse is below the cut:

Cruising with Toddlers is Child’s Play Onboard Disney Cruise Line

Traveling with your potty trained child has always been easy on the Disney Cruise Line. You could drop them off in the morning at one of the ship’s great programs and pick them up for dinner (or not, as often the child wanted to stay and play). DCL also had some programs for younger kids, but now they’re expanding that program to make it even easier to bring the youngest children along.

Traveling with infants and toddlers on Disney Cruise Line will soon be easier than ever thanks to a cruise industry-first service that delivers baby supplies directly to guest staterooms and a host of child-friendly offerings onboard the Disney Magic and the Disney Wonder.

Beginning March 15, families preparing to sail on Disney Cruise Line with little ones will have access to an online service that allows them to order baby supplies in advance of their cruise and have them delivered to their stateroom. The new service is exclusive for Disney Cruise Line guests and provided by Babies Travel Lite, an online retailer offering more than 1,000 brand-name baby products including diapers, baby food, infant formula and specialty travel items.

The next set of guests to board the Disney Magic will enjoy an extra dose of pixie dust during their journey. The Disney Magic just left two weeks in dry dock and now offers more options for adults, children and families that experience Disney Cruise Line magical vacation.

The changes are hard to miss, especially on the pool decks: additions were made to the Mickey Splash Zone with a Fantasia’s Sorcerer’s Apprentice overlay, and a splash of upscale elegance was added to the adult-only Quiet Cove pool area. Other modifications have been made to the staterooms with 22 inch flat-screen LCD television sets. I think the Fantasia Overlay at the Mickey Splash Zone Pool will be a big hit. 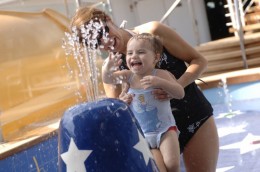 The latest theatrical musical to come from The Walt Disney Company is really making waves. Well, at least the Disney Wonder, the ship upon which it is staged, is making waves. Using Randy Newman’s Oscar nominated hit song “You’ve Got a Friend in Me” as… Read More »Toy Story Musical Hits the Waves