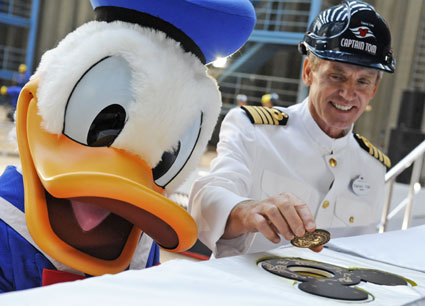 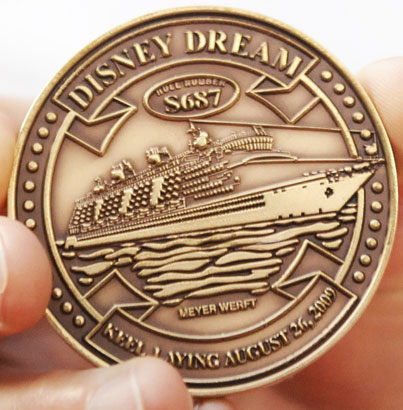 The Disney Dream is scheduled to join the current fleet in 2011, followed by Disney’s second new ship, the Disney Fantasy in 2012. Together the two new ocean liners will more than double the capacity of Disney Cruise Line, each having 1,250 staterooms and a tonnage of 128,000.

Bringing together innovation in superb shipbuilding and creativity in imaginative storytelling, Disney Cruise Line and Walt Disney Imagineering, along with the Meyer Werft shipyard have created a truly distinctive design. Like the existing ships, these ocean liners were designed to deliver a unique vacation that every member of the family believes was created just for them. Design details will be revealed later this fall.

Synonymous with its name, the Disney Dream will evoke the unique heritage of the company’s ideals in creating enchanting places and stories where families’ vacation dreams come true.

Both new ocean liners will call Port Canaveral, Fla., their home, where expansion efforts are underway to accommodate the larger ships and additional guests. In addition to an extension of the dock and enlargements to the one-of-a-kind Disney terminal building, a new multi-level parking structure will be built, complementing the design and storytelling elements of the ships. The new enhancements will provide guests an even more seamless transition from land to sea during their vacation experience.

Disney Cruise Line also recently announced that the Disney Wonder will operate from the Port of Los Angeles starting in 2011.

In addition to the new ships, Disney Cruise Line continues to expand itineraries, with plans to once again sail the Mediterranean region aboard the Disney Magic during the summer of 2010. In addition to the popular ports in Spain, Italy and France, the ship will visit Tunis, in Northern Africa, the island nation of Malta and Corsica. Disney Magic will also visit the historic cities of Northern Europe for the first time calling on Warnemunde, Germany, the gateway to Berlin and St. Petersburg, Russia. Enchanting Scandinavian ports like Oslo, Copenhagen and Stockholm, will also be a first for Disney.

Holz noted that the company will begin to announce some itineraries for 2011 in September during the D23 EXPO, the ultimate fan experience where the entire world of Disney will come together under one roof at the Anaheim Convention Center in California.