It was high drama on the high seas last night as the Disney Wonder rescued a guest who fell off the Carnival Cruise Line ship the Sensation. At the completion of its trip, the Carnival Sensation was heading into Port Canaveral when the man fell off the ship somehow. He treaded water for about an hour until the Disney Wonder, also heading into the port, found and rescued him. His condition is reported to be okay.

How do we know this? A Disney Wonder guest twittered the whole thing. I’ve included a jpg of the tweets below from user BigHeadDennis. 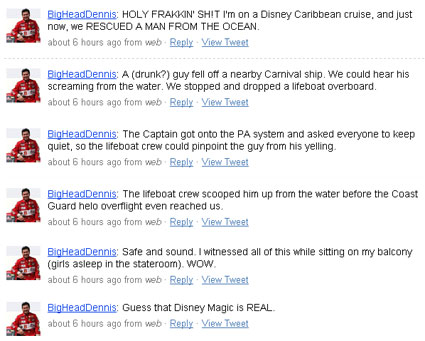 I wonder if this is the first time a rescue like this has been twittered.

Transcript is below the jump: