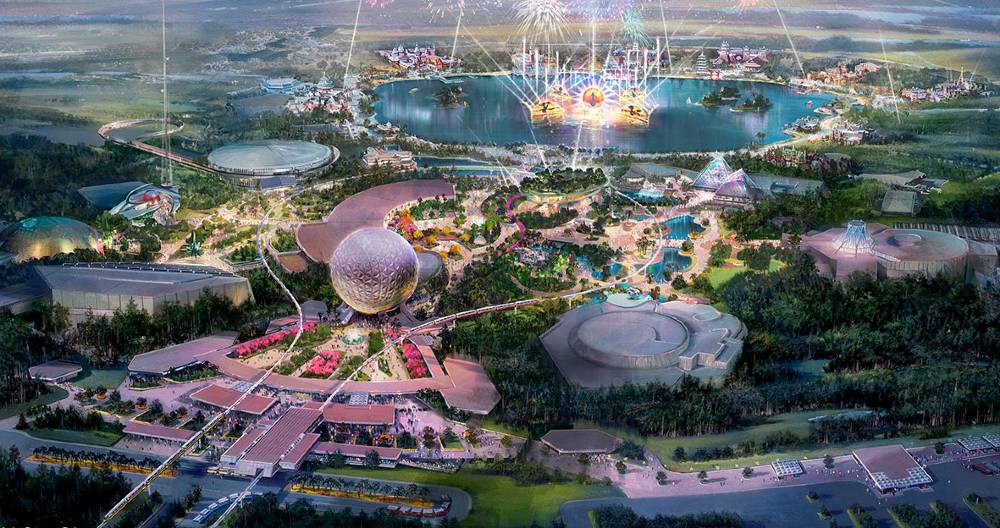 We have had a few minutes to zoom in and take a closer look at the big piece of concept art for EPCOT’s transformation that was released at D23 Expo as part of the Parks Pavilion. There’s a lot in there that’s has us excited. So let’s take a closer look at what we think we see, keeping in mind, of course, that this is just concept art and until the ribbon is cut at the grand opening, every thing is subject to change.

1) This concept art has tram loading and unloading in similar configuration to the one loading zones, but based on construction already underway at EPCOT, I think we can assume this is the first piece of concept art that has already changed.

2) There is a new Security screening area with a roof. That should help in Central Florida’s notoriously fickle and hot weather.

3) We also spot some additional greenery in the area between Security screening and the the ticket booths. We can all appreciate a place to rest in the shade of a tree while waiting for your party. 5) We don’t see where the Leave a Legacy tombstones are being relocated to, however.

6) The fountain in front of Spaceship Earth appears like it will get a recreation of the original acrylic art that adorned it and that it will light up at night.

7) A Space Elevator will be represented on top of the Space Restaurant somehow. Perhaps with some creative use of spot lights? 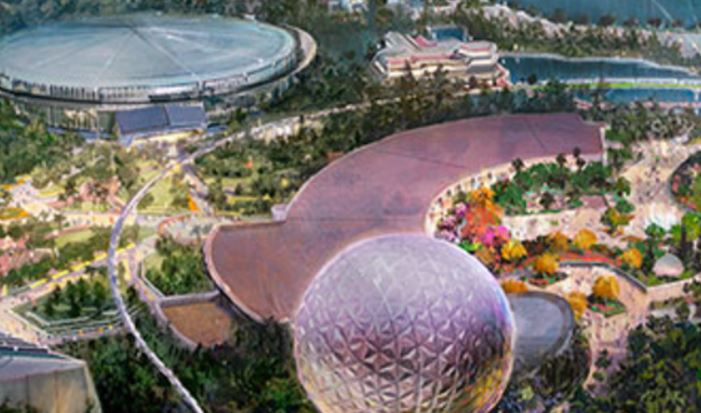 9) There are new pathways through the spine that will pull guests toward the center of the park.

10) Between Living Seas and the new spine is what looks like a water play area. Could that be the new Journey of Water Moana attraction? 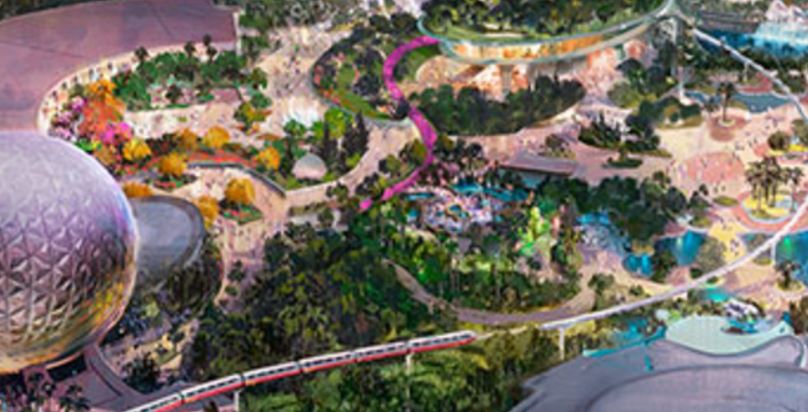 11) Closer to the World Showcase, there is an elevated building (reminds me of the George Lucas Museum currently under construction in SoCal) in middle. Perhaps a restaurant facility?

12) Concept art also reveals what looks like a television studio inside the elevated building.

13) A rooftop garden looks like a relaxing place to soak up some rays and the entire building will probably have a great view of the new World Showcase Lagoon and its night show. 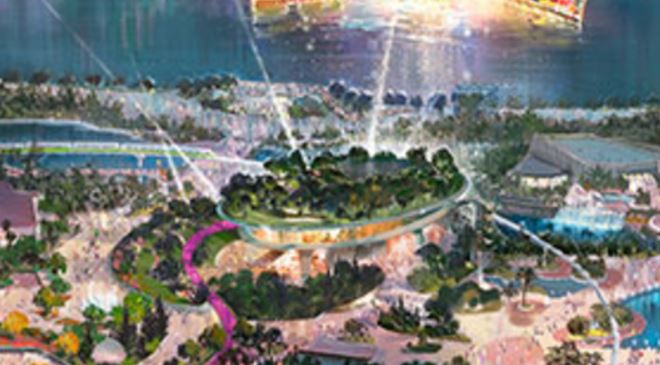 14) The Odyssey building will house the Epcot Experience – a preview center of what’s to come. Note, the kitchen and service area appears to still be available for festival related food and drink sales. 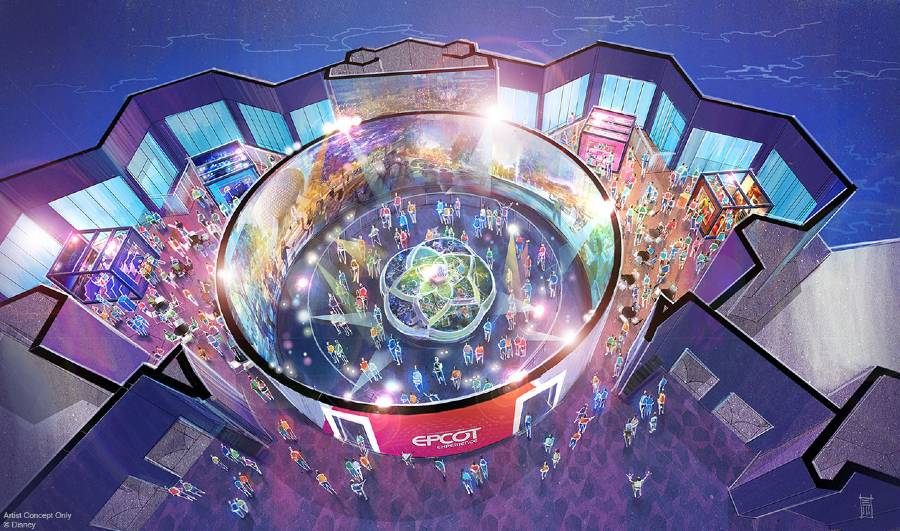 15) We think we spot a new viewing area at the edge of the World Showcase Lagoon for better viewing the new nighttime show? Or maybe more dessert parties.

16) Both World Showcase gateway gift shops appear to be diminished in size or even gone all together.

17) We don’t spot any new country pavilions on this map. There are more announcements expected at D23 Expo so don’t give up hope that your favorite rumor will come true.

18) The World Showplace, the old Millennium Celebration tent, is missing. I don’t think it’s going anywhere though. It was probably an artistic choice not to show a giant tent on the artwork.

19) The New Remy’s Ratatouille Adventure attraction and expansion to the France Pavilion is on the concept art, but we don’t see the Disney Skyliner represented anywhere.

20) While we do see smaller fountains added to the west side of Future World, we don’t see the huge dancing fountains like were shown in the concept art that was revealed two years ago.

21) The “Journey to Water” Moana attraction will have a variety of water features including interactive splash elements. 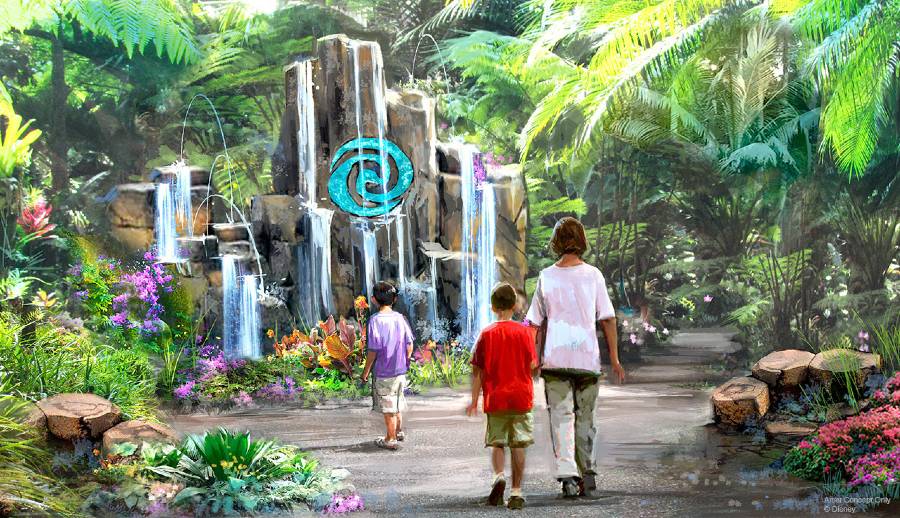 Expect more to be announced. There’s also a lot more concept art in the pavilion that Disney hasn’t made available yet. I see some more interactive gardens and potentially some new shops and restaurants in Future World .

previousOne Day at Disney: The Book and Documentary Series We Have Been Waiting For
nextD23 Expo to live stream select sessions each day for remote Disney fans