Disney dropped big news about a makeover of Epcot’s entrance and FutureWorld core area a few years ago with some concept art that showed the park with a lot more green space. More details of that vision have been released today for the multi-year transformation of Walt Disney World’s second park.

Announced for the first time today is a new pavilion that will be unlike anything Disney has done yet – the Play Pavilion. Located in the former Wonders of Life pavilion, the space will be “devoted to playful fun and feature an innovative city.” In the pavilion guests will encounter interactive experiences, their favorite Disney characters, hands-on activities, entertainment options and more.

“This innovative, new pavilion is beyond anything we’ve ever created and is completely unique to Epcot,” said Zach Riddley, portfolio executive, Walt Disney Imagineering. “Built on the power of play, it introduces an immersive and interactive ‘city’ where you can explore, create, and interact with some of your favorite Disney characters. This is an experience worthy of our bold vision for Epcot – and another signature element of our transformation.”

Does the new look for the Play Pavilion remind anyone of the designs for the Internet in Disney animation’s “Ralph Breaks the Internet?”

The Play pavilion is expected to open in time for the 50th Anniversary of the park. That means the current use of space as a HQ for Epcot’s many festivals will have to change. So far, nothing like a new attraction has been announced, but Wonders of Life used to hold a Star Tours like attraction with Body Wars and Cranium Command which was a show augmented with audio-animatronics and silly jokes.

Update with a few thoughts on the design in the concept art:

Is that a hotel entrance inside the new Play Pavilion or just some playfulness from the Concept Artist? It would not be that bad of an idea to make your Epcot hotel enter into a pavilion. When the park is closed, the pavilion itself could serve as an extended exclusive lobby for the hotel.

However, I think in this case it’s just creative liberty since the logisitics of getting guests inside a theme park for a hotel, not to mention any hotel visitors, are a big of a challenge.

I’m also interested in the “Wedway” pavilion with what looks like a tribute to the Monorail and maybe the people mover? Could it be an actual station for a Wedway Peoplemover inside Epcot? If so, this would be the first sign of something that has long been needed at the park. What better way for Disney to pay tribute to Walt’s vision than building in mass transit to Epcot.

But it’s more likely that, like on Main Street, these are just facades which hide behind them some sort of character meet and greet, interactive exhibit, or movie.

As Epcot prepares to close the original Communicore buildings that make up the core of Future World for its update of that area, the character meet and greets will have to go somewhere. The Wonders of Life pavilion has long been rumored to be that place. The recent upgrades to the exterior of the pavilion, to fix some water leaks and generally improve the look, were a sign that those plans were moving forward. Today we got the official word and our first look at Disney’s concept for the space. 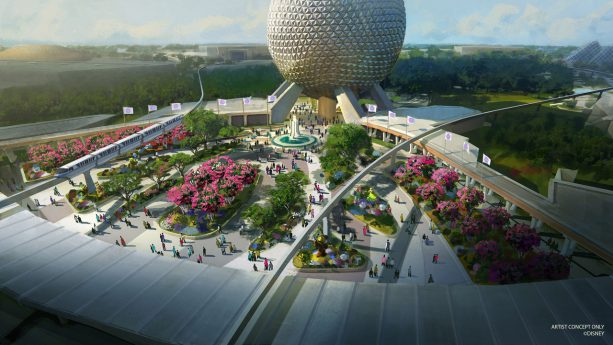 Disney has also released updated concept art providing a clearer look at what the redone entrance to Epcot will look like. As expected the Leave A Legacy structures will be moved to a new area clearing up space for Epcot to add more pathways, sweeping green spaces and a new take on their classic fountain.

It doesn’t look like Epcot is taking a huge swing at something different here, just a much needed update dealing with guest flow and providing more opportunities to encounter characters and other elements. I do like that some of the original elements, like the fountain, might be coming back in some form.

This is just part of the overall transformation that will change the core of the FutureWorld area of Epcot and maybe even include a hotel at some point.

We like to think of Epcot as what best represents Walt Disney’s original vision for Central Florida and keeping true to that vision is important.

We’re pretty excited about these changes, which we think are long overdue for Epcot. We’re hopeful that Disney will keep Walt’s original vision in sight as they make these updates.