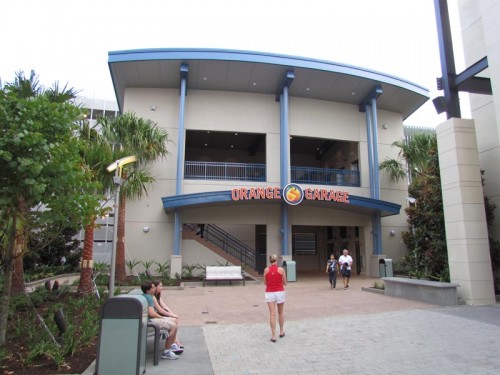 The 2nd Pedestrian Bridge walkway connecting the Orange Garage parking structure with the Westside of Downtown Disney is now open. Guests cross over on the second level and enter right between Splitsville and AMC Theatres.

The two bridges are now the only ways to cross over from the structure to the shopping and dining district. All the exits on the bottom floor have been closed. This increases safety significantly, but has led to a bit of confusion.

Disney has added a bunch of signage indicating that you have to head the 2nd level to cross from the garage to Downtown Disney. However, it may not be enough. In the 5-10 minutes I stood near the new bridge, I noticed a lot of families confused about where to go. Many would walk over from parking on the 2nd level, see the escalator down and take it to the first floor thinking they could cross the street that way, they would then have to come back up and cross over the bridge.

I think it will all get shaken out when the parking structure is completely finished. We’re still waiting on some work around the exterior of the garage, including ramps that will take cars direction from Buena Vista Drive into the upper levels of the parking lot.

Meanwhile, I’m sure the owners of the PopGallery are happy to have foot traffic back and Splitsville is even experimenting with opening a door across from the gallery so you don’t have to walk all the way around the building to get a table. 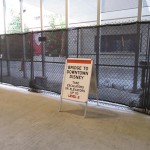 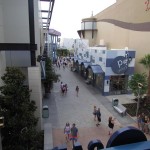 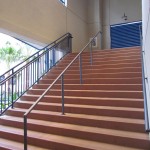 Then take the stairs or elevator back down 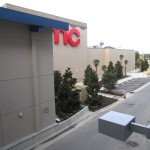 The walkway takes you over backstage areas for deliveries 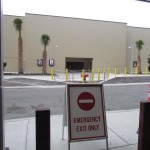 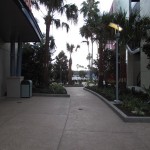 But you can walk toward Cirque Du Soliel on sidewalk.

Construction continues around the rest of Disney Springs, including a smaller second garage. The construction does not appear to have scared off the tourists either, Downtown Disney was very crowded for a Tuesday night. With all the new stores and restaurants open in The Landing, there’s already quite a bit more to see and do.