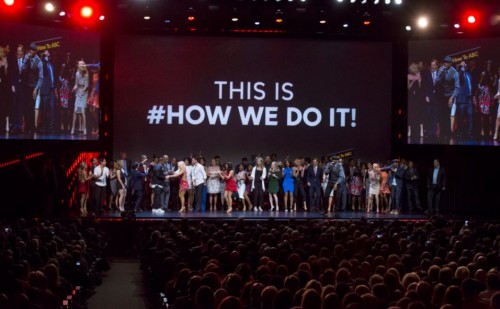 ABC just had it’s annual self love fest, in the form of Upfronts (for those unfamiliar, it is the official unveiling of the fall shows and schedule, all directed towards advertisers) and luckily, this year it wasn’t chop full of lies! Usually, every year a network isn’t doing well (cough cough Fox), they have to show-off one thing in particular, or try to mess with statistics to make them seem like they are on top (Congrats on Empire, really, but that is all ya got).

ABC had the ability to show that they were Number 1 in Entertainment programming, so everything except sports. That is pretty spectacular, coming from last year’s 4th place finisher. ABC had 4 shows hit big last season (Blackish, How to Get Away with Murder, Secrets & Lies, and Fresh Off The Boat), which is a great record to have going into a seemingly strong line-up of new shows.

One thing ABC seems to really be embracing is gap programming. If you look back just 3 years ago, networks were still airing a quintillion reruns for their most popular programs. Now, ABC is really leading the movement to air new shows in between breaks of beloved shows. Agent Carter and Galavant, neither did exceptional ratings, are coming back to fill gaps of S.H.I.E.L.D. and Once, respectively. Audiences want fresh things, not the same episodes over and over. So when at first glance it looks like ABC has enough new programs to support a small Russian army, just know that they will fill gaps. (Wicked City will be the gap show for Quantico, The Real O’Neals for The Muppets, etc.)

I’ve watched all the previews for the new shows, so let me give you my Best and Worst 3.

3. The Muppets– Man, does this trailer kill or what?! I am obsessed with every joke in here. I did become very tired of “Not your grandmother’s Muppets” being said over and over, because that is clearly not true. Is the format different? Absolutely, as variety has made way for mockumentary. The humor is still just as amazing as ever, being self referential, witty, and just a good time. Sam the Eagle approving of the American Broadcasting Company was a highlight, along with Gonzo’s hatred of confessional cut-aways. Tuesdays at 8pm has been a rough time slot for ABC as of recent, but I feel that if anyone can help it, it would be The Muppets!

2. The Catch– TGIT is the powerhouse for ABC, or any other network, when it comes to Entertainment programming. Grey’s, Scandal and Murder all dominate in ratings and social interaction, but when Murder ended and it was replaced with American Crime, the TGIT line-up just didn’t feel the same. How can you create a brand around Shonda Rhimes, and then not show a Shonda show? BLASPHEMY! So, ABC is fixing their problem. When Murder ends for the season, The Catch will take its place. Starring Mireille Enos, it follows the Queen of fraud protection. She can sniff out a con artist from a mile away. However, when her fiancee cons her, all hell breaks loose. Beautiful, Shondarific hell.

1. OIL– This show was made for me, truly. Chace Crawford, in North Dakota, in a nighttime soap that looks like Revenge, Dallas and Nashville all had a beautiful love child. It follows a couple who move to North Dakota to follow a Gold Rush-esque movement, due to the discovery of oil, reportedly more plentiful than Saudi Arabia. Then, the poor/rich, good/evil battles begin, along with the lies, deceit and sex. Lots of sex. Wonderful, fantastic ABC sex. It’s as if they went inside my brain and picked out everything I’ve ever wanted in a show. An ABC soap set on a prairie?! YES PLEASE.

3. Dr. Ken– I want to like this one, as some of the online buzz surrounding this is strong. A lot of people seem really excited for this one, more excited than any other post-Last Man Standing time slot entry. I’m also a big fan of the multi-cam sitcom and want more of them to succeed (Side note: If you don’t watch Girl Meets World, you’re gross). However, the jokes just fell flat. I think this subdued Ken Jeong is really enjoyable, as most of his popular characters have been so bonkers crazy that I haven’t cared for them. Hopefully, this becomes one of those “pilot is the worst” sort of scenarios, but just based off of the trailer, I’ll be skipping out on this one.

2. Of Kings and Prophets– Dear all television networks, The Bible was something that worked miraculously well, but won’t happen again (as seen with A.D. and CBS’ recent foray into the biblical genre that was so irrelevant I forgot its name). Also, you will never have Game of Thrones success because you can’t show any of the stuff Game of Thrones is famous for. Thus, banking on both of those to give you a hit on 10pm Sunday nights is impossible. Also, it looks boring. Signed, the American viewing public.

1. Uncle Buck– This is ABC’s “Coach is coming back to NBC” equivalent. We don’t need this. So don’t give it to us. Here’s a fun game to play while watching the trailer: If you laugh more than 0 times, buy yourself some hard liquor, because you should question your own taste in comedy. (Wow, that was even harsh for me…)

Let me go on record of saying, by bottom 3 are the only 3 I dislike, as this year looks really strong for ABC. The Real O’Neals looks fantastically executed (and Martha Plimpton is Amazing)), Wicked City looks super intriguing (and Ed Westwick is amazing), The Family looks like can’t miss television (and Liam James is amazing), and Quantico looks like the show that will help get ABC out of its Tuesday rut. (And that logo artwork is stunning! I know, that is super nerdy, but I was like “Damn, you go ABC visual arts department!” Also, the lead is stunning and riveting. Priyanka Chopra is gonna KILL IT.)

What shows strike your fancy? Do you agree with my lists? Let me know in the comments below!