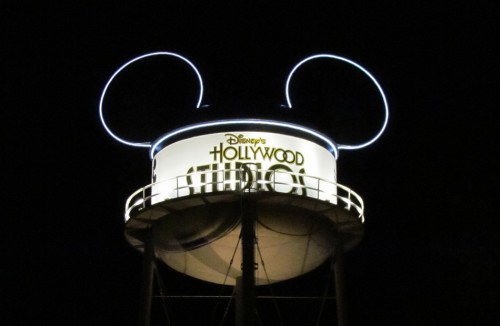 I’m like most Disney theme park fans, I hear rumors all the time, some of them are more legit than others, but it can be hard to tell which actually have some nuggets of truth. To help with this, I have a rule – I don’t believe anything until Disney actually breaks ground on the project. But that doesn’t mean I can’t speculate about the latest rumors. So, keeping my rule in mind, here’s my latest understanding of changes coming to Disney’s Hollywood Studios.

The Sorcerer’s Hat is getting moved. If it’s possible to save the hat (which isn’t a given considering how much steel and concrete when into placing it at DHS) there are a couple of options as to where it will end up. It could go where it should have been placed originally – the Christmas Tree planter in the lakeside plaza out on front of the park. There it will provide a great moment as guests arrive from the bus, parking lot, or friendship boat dock. It can continue to house a store just like the little shop outside of Disney’s Animal Kingdom does. Plus, you’ll be able to view the hat from 360 degrees, which you really can’t in the park. Another likely location would be Disney Springs where it would fit in nicely in the modern west side area.

Moving the hat is rumored to be the first step in what will be a major makeover for Disney’s Hollywood Studios. This will likely happen over a period of many years, but the park is expected to get (we’ll try and figure out the order of these later): Star Wars land, Toy Story play land, Cars Land (junior edition), a new parking lot entrance and extra parking spots, a performance corridor for parades, and a placemaking overlay on the order of Disney’s California Adventure (possibly with an entirely new entrance plaza).

Disney has stated that moving the hat will allow them to start on a “re-imagining” of the hub of the park, but they haven’t said how extensive that project will be. Disney has also announced that there will be Star Wars added to the parks and they promise to tell us more about what that will be in 2015. We can also logically assume that something will replace the Backlot Tour area that shut down. That’s actually a fairly sizable area, so it might be used for more than one thing. Current rumblings have some sort of Pixar themed attractions being added.

With these changes the park will drop all pretense of being a working studio (if the closure of Backlot Tour didn’t send a clear enough signal) and move into something more akin to a celebration of great Hollywood themes. Think Science Fiction, Film Noir, the Musical, Animation, Westerns, etc. Of course, Disney with its newly expanded library of movie properties (Marvel, Lucasfilm, The Muppets, Pixar) and its own classics, will want those franchises to be front and center at the park. This means we may say goodbye to the Great Movie Ride, at least as we know it. Dining locations like “The Commissary” and “Backlot Express” will close or get new themes and the Streets of America and Lights, Motors, Action stunt show will go away.

Other attractions expected to close soon: The Legend of Captain Jack Sparrow Pirates of the Caribbean experience (announced), Lights Motors Action (rumored), Great Movie Ride (rumored), Indiana Jones Epic Stunt Show (rumored), and Honey I shrunk the Kids Playground (rumored). In fact, if you look at the map I drew up, you’ll see that more than half of the park is either in red (removal has bee announced), yellow (rumored to be on the chopping block), orange (backstage areas that could be relocated), or blue (potential expansion area for the park). 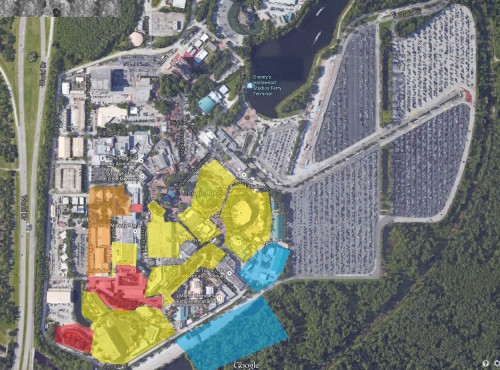 That should give you an idea of what a major project Disney could be preparing to undertake at Disney’s Hollywood Studios.

In part two we’ll talk about budgets and timelines and how all this speculation might play out.

previousInstapic: Selfie station?
nextClip from Avengers: Age of Ultron to air with this week’s Marvel’s: Agents of S.H.I.E.L.D.