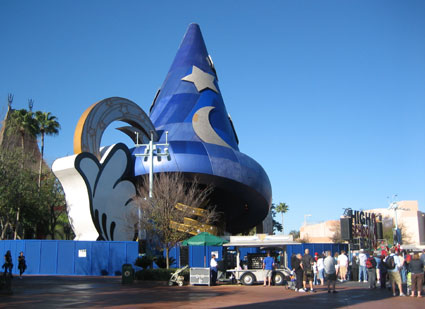 Ding-Dong the hat is dead. A Disney spokesperson has confirmed that Mickey’s Sorcerer Hat will be removed from the center of Disney’s Hollywood Studios as they embark on a change that will re-imagine the central hub of the park.

The BAH (or big-ass-hat, as detractors liked to call it) was original installed in Sept 2001 as part of the 100 Years of Magic celebration at Walt Disney World. It has since been used in merchandise and on park branding as the icon for the park replacing the “Earful Tower.”

There was no confirmation if the hat would be totally removed from the park, or just moved to the Christmas Tree planter outside the main gates of the park.

Also confirmed to be closing is “The Legend of Captain Jack Sparrow” experience. Last day for that is November 6th. This does not surprise me as the exhibits in that space have always been temporary. Maybe we’ll get something for “Into the Woods?”

Are you happy to see the hat go? What attraction do you expect to hit the chopping block next?