Lots more to see below the jump, including over 15 more photos of Rada’s designer costumes: 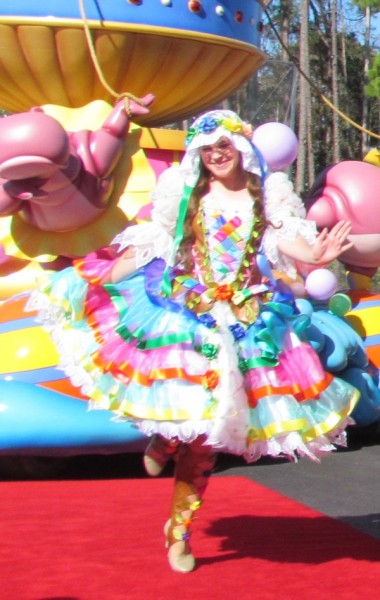 From the Swing Thugs aboard the “Tangled” unit’s massive longship to the troupe of Scottish dancers announcing Merida’s arrival in the “Brave” unit, Rada carefully planned and executed the detail of each piece. Visual cues such as color and texture choices were taken from each float and incorporated in the costume designs. Additionally, she closely studied the style guide of each film for whimsical details and fabric patterns to capture the essence of each story.

Putting a modern spin on classic elements is a theme that resonates throughout Rada’s designs. From the swan neck collar and iridescent feathers on the Princess Garden unit’s Swan Court ball gowns to the sculpted conch shell headpiece and shimmering pastel dress that comprise “The Little Mermaid” unit’s Seashell Girl, the old and new are blended seamlessly – a trend that is ever present in today’s fashion world.

From first sketch to final stitch, the production process took almost a year to complete. The creations transpired in 10 different costume houses across eight cities and two countries, with the Creative Costuming facilities in both Florida and California among the mix.

After gathering the materials, she and a Creative Costuming graphic artist worked together to create almost 40 custom fabric prints. This includes the spandex swirls on the Finale unit’s bright and beautiful Bubble Girl, expansive fins of “The Little Mermaid” unit’s regal Lion Fish and furry plaids and tweed stripes worn by the “Newsies inspired” Lost Boys of the “Peter Pan” unit.

An innovative 3D printing technology brought to life even Rada’s most intricate concepts, with the hauntingly elegant beaks of the Ravens in the “Sleeping Beauty” unit being a prime example. Using a 3D origami program, a paper beak was created and placed on a performer’s head to obtain the initial scale and shape. A digital sculptor then worked on the filigree beak design, which was printed, fitted and refined to produce the final shape. Each piece was base coated, bronzed, lacquered and gilded with fiery Swarovski stones to complete the finished look.

In the true spirit of fashion, each look was not considered complete until complemented by the perfect hair, makeup and accessories. The Finale unit’s Cha Cha Girl is the queen of head-to-toe ensemble with her big top inspired fit and flare dress, bolero jacket embellished with sequins, star spangled tights and hair reminiscent of pulled taffy exuding the essence of Storybook Circus in New Fantasyland. However, simple touches that might elude guests, such as the elegant gold tones incorporated into eyelashes on the female Swan Court members, and in the custom socks worn by the Lost Boys were not overlooked – a testament to Disney’s attention to detail.

When the Disney Festival of Fantasy Parade steps off this spring, Rada will see her creations truly come to life. This perfect collaboration between artists, craftsmen and engineers is what she calls “a designer’s dream.” 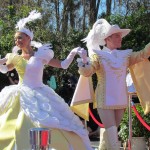 Swan dancers from the opening float 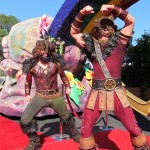 Thugs from the Ugly Duckling from Tangled 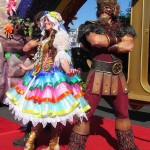 A festival dancer from the Tangled unit 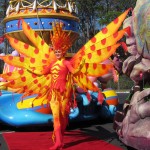 A lionfish from The Little Mermaid unit 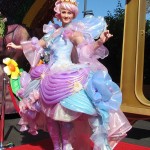 Sheshell Girl from The Little Mermaid. Her headdress is 3D printed 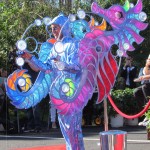 SeaHorse from The Little Mermaid 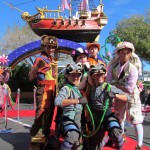 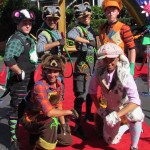 The Lost Boys are Newsie inspired 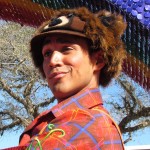 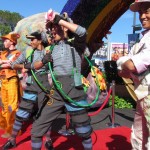 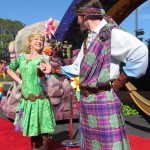 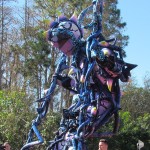 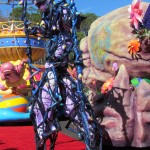 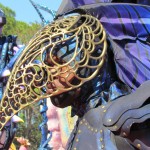 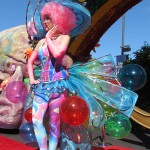 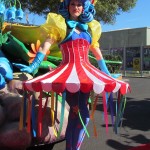 What do you think of the costumes? Later we’ll have more from the event, including interview with the parades creative team and a closer look at the three floats they had on display.