Save The Small World campaign site is up

The Save It’s A Small World campaign has an internet headquarters now. Save The Small World has all the contact info you need to make your voice heard. There will also be news updates on the status of the campaign and buttons you can add to your site to show your support. 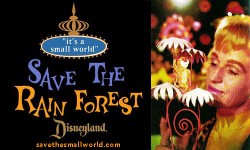 In case you forget what the fight is over:

“it’s a small world” is the world-famous Disney theme park attraction which first debuted at the 1964 World’s Fair. Designed by Disney for UNICEF and Pepsi Cola, “it’s a small world” is the crowning achievement of artist Mary Blair and numerous other talented individuals. The attraction, dubbed as “The Happiest Cruise That Ever Sailed ‘Round The World” was designed with UNICEF’s core values in mind, and offers a “prayer for peace” sung by the Children of the World.

Disneyland wants to turn that into another advertisement for their branded characters. They also want to remove the ‘Rainforest’ section, a message of conservation, and replace it with a tribute to the USA, a message of commercialism. If that’s not a metaphor for what’s wrong with this move, I don’t know what is.

My grandfather, an Imagineer for Walt Disney, worked on preparing Disneyland to receive the 1964 World’s Fair attractions. It’s A Small World got special treatment and attention to make sure its message would continue to entertain and educate guests with the same impact it did in its original incarnation. Change is often required to accomplish this. The Holiday overlay, while it has its flaws, still is a prayer for peace at its heart. Surely there are changes the great minds at WDI could come up with that continue that original vision without mixing in Disney characters.

Please visit the Save The Small World site and send your comments into the contacts listed there.