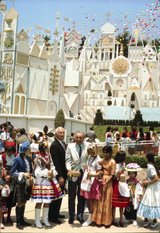 Kevin Blair has penned an open letter to Disney Executives, Disneyland, Walt Disney Imagineering, and John Lasseter asking them to discard any plan to change "It’s A Small World", the attraction featuring art design by his mother, such as adding Disney characters (such as Mickey Mouse, Donald Duck, & Goofy) or removing the rain forest section to replace it with a scene depicting the excellence of the United States Of America.

I’m as patriotic as the next man, but the signal Disney sends by literally tearing down the rainforest to replace it with scenes of America’s strength is at best impolitic in this time of need to conserve our resources to prevent global warming. Because of this, I have a hard time believing the original rumor.

I won’t even go into how absurd an idea it is to add Disney Characters to the classic attraction at Disneyland.

Regardless, it’s best to be safe and mount a campaign to save the attraction now. Disney learned its lesson with its attempt to remove Mr. Lincoln and won’t telegraph so broadly changes it thinks will be unpopular with its fans. The rainforest will go away just as the Keel Boats and Walt’s Office did; with vague promises of it being a temporary thing. But then it lingers into permanency and eventually becomes status quo with the company line changing to reflect that.

Speaking of which, has anyone seen Mr. Lincoln recently? He was only supposed to go on vacation for the 50th anniversary. We’re well into the 2rd year after that date passed.

More on the whole affair at the LA Times Travel blog.