October Dedication event for LEGOLAND, Florida Coming hot on the heels of their second US theme park, Merlin Entertainments Group Ltd and GCDS Corporation just announced the selection of Nagoya, Japan as the preferred location for the seventh LEGOLAND park. Pending negotiations and permitting to operate… Read More »Nagoya selected as Location for LEGOLAND Theme Park

Warning watching the following video may induce nausea and nightmares. The dolls look like zombies and the song is extra creepy plus those lights. Ow.

There actually two of them in China. the above is Suzhou Amusementland and the one below the jump is from the Jin Jaing Action Park.

A Testament to Technology: Imagineers Use Innovations to Help Build Fantasyland Expansion

Disney Parks released a video a few days ago entitled “Imagineers Use of Innovative Technology to Build New Fantasyland”. As the name suggests, the video demonstrates the significance of innovative visualization technologies, primarily the iPad, that have helped Imagineers in building the Magic Kingdom’s new Fantasyland expansion.… Read More »A Testament to Technology: Imagineers Use Innovations to Help Build Fantasyland Expansion 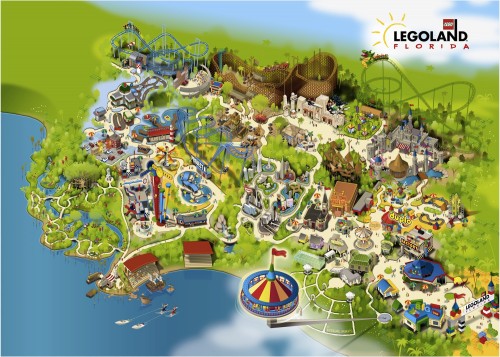 The announcement that LEGOLAND Florida would be coming to Polk County was greeted with the happy realization that the park would mean plenty of jobs for a region that had been hurting a lot in the recession. There have been hundreds of construction jobs created, a couple hundred of management and maintenance positions have been filled, and finally, the bulk of the expected 1000 jobs required to operate the theme park on a day to day basis are now open for applications.

If you’re interested in one of those jobs you must apply online at www.LEGOLAND.com/jobs. Most of the jobs will start in late September or early October leading up to the parks grand opening on October 15th.

As part of the announcement LEGOLAND released this footage of the park under construction, as well as someone applying for the job online. I love seeing what they’ve done to the Cypress Gardens property so far.

More details on the hiring spree below the jump:

The debate over Free Wifi in the parks

Posted this over on Facebook and it’s elicited some interesting comments: There’s a debate going on about whether theme parks should offer free WiFi in the parks. If you had free WiFi would you use it augment your experience (such as looking up trivia, learning… Read More »The debate over Free Wifi in the parks