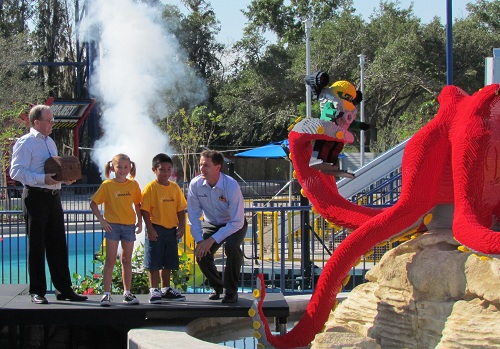 Coming hot on the heels of their second US theme park, Merlin Entertainments Group Ltd and GCDS Corporation just announced the selection of Nagoya, Japan as the preferred location for the seventh LEGOLAND park. Pending negotiations and permitting to operate LEGOLAND Japan within Nagoya city limits, the family theme park could open as early as 2015.

There are currently five LEGOLAND Parks – the first LEGOLAND was built in Denmark in 1968, followed by LEGOLAND Windsor in the U.K., LEGOLAND California in the U.S., LEGOLAND Deutschland in Germany and the most recent, LEGOLAND Florida which was opened in October this year. The sixth, LEGOLAND Malaysia in Iskandar, is now under construction and it is due to open in 2012.

“We are very pleased to be working with GCDS and to have reached this agreement in Japan, which illustrates the strength of the LEGOLAND brand and of Merlin’s business model across the globe. The Asia Pacific region provides a great opportunity for Merlin’s continued development across our brands, particularly LEGOLAND,” said John Ussher, Merlin Entertainments’ General Manager of LEGOLAND Development. “This site, it’s potential as a catalyst to build a major tourist and leisure destination in Nagoya and Japan, and the support of the City of Nagoya, all played a key role in our decision to take this project to the next stage.”

“We sincerely believe LEGOLAND Japan would make Nagoya an important tourist destination for both domestic and international markets,” said Mr. Frank Stanek, the designated Chairman of the Japanese entity that would develop LEGOLAND Japan. He added that he was convinced this would be Nagoya’s answer to Tokyo’s Disneyland and Osaka’s Universal Studios – both being very successful theme parks that he actively developed in senior leadership roles during his previous corporate career.

Merlin Entertainments Group, the second largest visitor attraction group in the world, and GCDS Corporation, a venture company with exclusive territorial rights obtained from Merlin Entertainments Group Ltd, have been evaluating and discussing several sites in Japan. Based on the results of these discussions, Merlin and GCDS today have confirmed to Mayor Kawamura and other officials of the City of Nagoya, a desire to continue conducting further and more detailed studies including due diligence, consents and final contract terms.

Merlin does not appear to shy from competing with other major tourist attractions. LEGOLAND Japan would be right in-between Toyko Disneyland and Universal Studios which is in Osaka.