The seventh episode of Star Wars premiers tonight in Hollywood. It’s expected to take over multiple theaters including the Disney owned El Capitan Theater, the nearby Dolby Theater, and the home of many previous Star Wars premieres, the Chinese Theatre. Invited guests got a note… Read More »Last minute Star Wars: The Force Awakens news

New Star Wars: The Force Awakens Trailer – Watch it and then join in the dissection in the comments

The new #StarWars Teaser Trailer starts with some pretty impressive visuals and then packs even more into it’s 2 minute length.

So without any further ado:

Breaking it down here. I’ll update as we learn more:

I love that Luke Skywalker starts off with some over-dialogue that implies there are new users of the Force out there. Gave me tingles down my spine.

We see a crashed Destroyer from the Empire on planet Jakku and landspeeder passes in front of it (Is this Rey on that speeder bike?).

A cloaked figure kneels by R2D2, we assume it’s Luke since he and R2 D2 are close, oh and the bionic hand thing.

We then see a young girl (possibly Rey) giving that cloaked figure a Lightsaber. 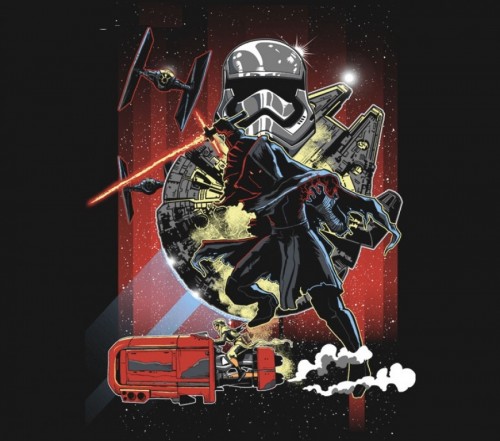 There are two new fan made t-shirts representing some of the awesome stuff we saw in the first preview trailer for Episode vii, aka Star Wars: The Force Awakens on Tee Fury today.

The first tee from zerobriant is available for the first time anywhere on Tee Fury. It features the best elements from the 39 seconds we all saw in the episode 7 trailer. From Rey on the bike to the Millennium Falcon, it’s all there.

Secondly, if you have a little sith blood in your veins, you may enjoy this new lightsaber shirt that glows in the dark with Red Fluorescent ink. 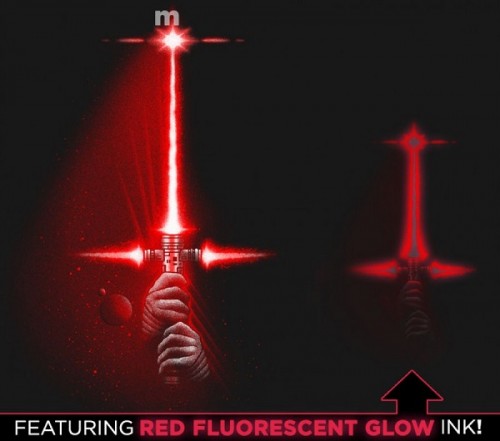 As a bonus, you won’t want to miss these shoes that feature Karen Hallion’s amazing Belle and Doctor Who mashup design.Read More »Star Wars: The Force Awakens Fan T-Shirt on Tee Fury

Star Wars fans rejoice! Character names for The Force Awakens have been revealed! While these reveals are kept mainly to those characters in the recent trailer, it is still very exciting. Probably the coolest thing about this reveal is how they did it. Using Topp’s… Read More »Star Wars: The Force Awakens – Character Trading Cards 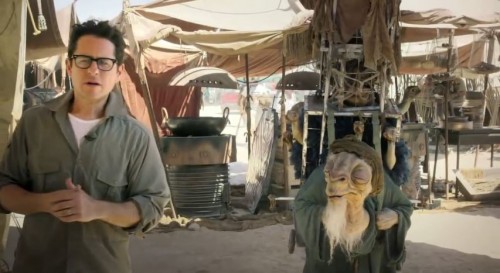 Enter Han Solo (Harrison Ford) and Chewbacca (Peter Mayhew) who might be a little worse for wear. Rumors about these two state that they no longer own the Millenium Falcon which Oscar Isaac now has. No worries though, we know from leaked set photos that the Millenium Falcon will make an appearance. Han either recognizes it as Luke’s old lightsaber or knows that Luke is the only one that can shed some light. Regardless, this encourages the group to seek out Luke.Read More »Star Wars Episode VII Rumor Roundup

Disney and Lucasfilm have promised to get the original gang from Star Wars back together in episode VII. Both Carrie Fisher and Harrison Ford are reportedly already finished with their work during the principle photography portion of the production. Mark Hamill’s story apparently requires additional… Read More »Good News, Warwick Davis will appear in Star Wars: Episode VII

Galactic Dispatch 103432: Han Solo was on an extended vacation from the Galaxy Far Far Away after breaking his leg when the door of the Millennium Falcon fell unexpectedly. Chewie had no comment, but was heard to chuckle a bit. Solo can outfly any ship,… Read More »“Star Wars: Episode VII” resumes production after injured Harrison Ford returns

JJ Abrams was notorious for the shroud of secrecy that surrounded his productions. The amazing lengths they went to hide actors, costumes, and sets in the Star Trek films actually did manage to keep much of what was in the film out of the public… Read More »Star Wars Episode VII Director’s Response to Leaks From The Set