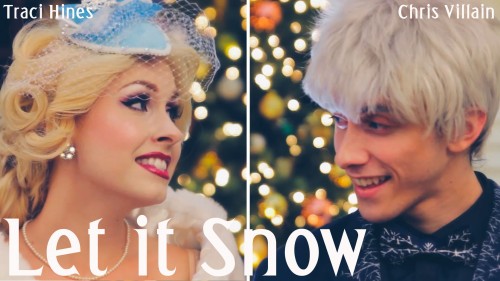 I’ve resisted posting most of the Frozen fan art. I could fill this blog with it, but the good news is there’s a lot of great stuff out there and it doesn’t take much Googling to find it. However, I’ll make an exception for today’s Videopolis.

For all you Jack Frost and Queen Elsa shippers out there, here is Chris Villain and Traci Hines covering “Let it Snow” with some retro inspired cosplay.

If that wasn’t enough, join us below for their take on “Elsa It’s Cold Outside.”Read More »Videopolis – a #jelsa Holiday

For Disney this may seem like a grand experiment, but for me it falls into the “why didn’t they think of this before” category. Take the one of a kind high seas vacation that is the Disney Cruise Line and offer a California based cruise with a focus on just Pixar films. It’s a great idea and it’s now officially happening later this year.

More than a dozen of Pixar Animation Studios’ most memorable characters  will make their shipboard debut during four special Pixar-inspired seven-night California Coastal cruises Sept. 16 through Oct. 14, 2012. During these voyages, Disney Cruise Line guests will be able to interact with and explore the world of Pixar and their beloved films while the Disney Wonder sails to popular port cities along the coast of California.

Taste of the Disney Fantasy

I’m onboard the Disney Fantasy have a great time as we’re transported back to the golden era of cruising. The internet is very slow, but I did want to upload a few pictures as a sort of teaser of what’s to come when we get… Read More »Taste of the Disney Fantasy

A berth, a cabin, a room, whatever you want to call it, everyone knows that cruise ship accommodations are notoriously small. But that doesn’t really matter, you’ll be spending the vast majority of your time out and about on the ship or in various ports.… Read More »Disney Fantasy – Presenting Your Lodgings

Disney Fantasy beautifully filmed while in port at Bremerhaven

We’re less than a month away from the official christening ceremony for the Disney Fantasy, the 4th ship in the Disney Cruise Line fleet. But before it can sail to New York for its dedication, it had to be put through some tests and final… Read More »Disney Fantasy beautifully filmed while in port at Bremerhaven

Via a new video we catch up with Frank de Heer, VP of New Ship Development for Disney Cruise Line, and Philip Gennotte at the Meyer Werft shipyard in Papenburg, Germany who discuss the difference between building the Disney Fantasy and the Disney Dream. Keep… Read More »Disney Fantasy vs. Disney Dream, What’s Different 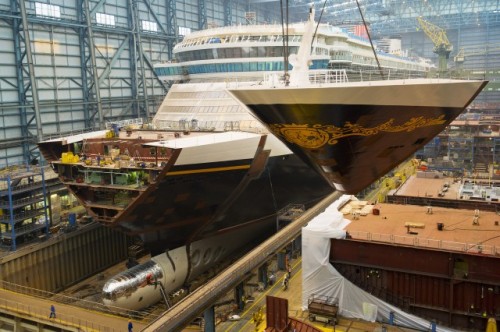 The Disney Fantasy may not be an exact duplicate of the Disney Dream, but it’s very close. Construction started on the Fantasy while construction on The Dream was still under way. So it may seem like work has been proceeding fast, but really, it is right on target for its March 2012 debut cruise.

This weekend the final building block for the Disney Fantasy, was placed at the Meyer Werft shipyard signaling completion of a major milestone in the ship’s overall construction.  The final block placed was a 265-ton portion of the ship’s bow, complete with the signature Disney Cruise Line golden filigree.

Like its sister ship, the Disney Fantasy will bring to life many of the innovative features guests love including AquaDuck — the world’s first shipboard water coaster.  But new design elements and guest experiences will give the Fantasy an identity all its own.

Some of the new highlights found on the Disney Fantasy include:

Video of them moving the final piece into place below the jump: