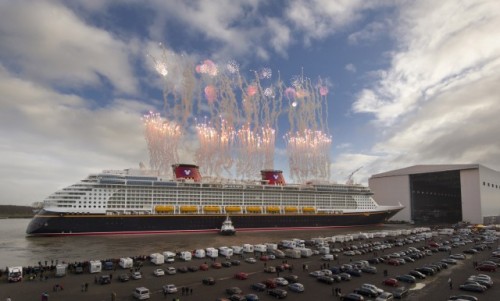 In a ceremony very similar to last year’s Disney Dream ‘float out’ the 4th ship in the Disney Cruise Line fleet, the Disney Fantasy, left the dry dock at Meyer Werft shipyard yesterday to begin the next stage of its construction. The maiden voyage is scheduled for March 31s, 2012 and there are plenty of finishing touches remaining to ensure perfect experience for every guest.

The Disney Fantasy features many of the innovations found on her sister ship, Disney Dream, with several new guest experiences exclusive to the ship that are sure to delight every member of the family. New experiences found on the Disney Fantasy include two Broadway-style musical spectaculars for the Walt Disney Theatre, a dining experience at Animator’s Palate where guests’ own drawings magically come to life, an interactive adventure quest starring the Muppets, a splashtacular water play area called AquaLab, a sophisticated nighttime entertainment area for adults inspired by European travel and much more.

The Disney Fantasy will sail seven-night alternating eastern and western Caribbean itineraries. All voyages will depart from Port Canaveral, Fla. and include a stop at Disney’s private island, Castaway Cay.

We were fortunate enough to sail on one of the early cruises aboard the Disney Dream. For those worrying if Disney can put enough stuff on a ship to fill a seven day voyage, there’s no need to fret. The Dream and her sister ship The Fantasy pack miles of magic into the decks. In fact, a longer voyage would be nice because you get the chance to experience some of the dining and other activities more than once rather than running around trying to fit it all in.

Anyone out there have a trip scheduled for the Fantasy? How are you finding the planning experience?