Editors Note: I’m republishing a series of posts written by my Aunt Linda seven years ago. In hosting me over my childhood summers in their Southern California homes, she and my Aunt Dorothea played a key role in nurturing my love of Disneyland (although they… Read More »The Park: Disneyland, Anaheim, 1959 Miss Piggy and Kermit the Frog can afford to buy that new house in Beverly Hills… the freshman series and reboot of the classic Muppets franchise has been given an extension by ABC. Disney and ABC likes “The Muppets” but not enough to displace some… Read More »Good news for fans of ABC’s “The Muppets”

Star Wars Rebels is the first real attempt at a new story set in the Star Wars Universe since Disney took the reigns of the property from George Lucas. And now we get our first look at the series via this clip revealed at WonderCon this last week. The short preview clip features an introduction from voice actress Vanessa Marshall and an exciting sequence from the upcoming animated series.

In the clip, Hera, captain of the Ghost, pilots her starship during a battle with two TIE fighters. A droid named Chopper delivers a message from the Jedi Kanan, currently engaging the TIEs in the top turret. The Jedi is apparently displeased with Hera’s maneuvering. In response, she takes matters into her own hands.

I love the antics of Chopper the droid. Star Wars Rebels is coming to Disney XD later this year.

I’d like to welcome back our newest guest author S. Divnich, who will be covering “V” here on The Disney Blog. – Ed.

It seems like we’ve been waiting forever, but the Visitors finally showed up last night with the premiere of V, ABC’s newest sci-fi offering.

The episode opened with an attempt to make it personal – captions reading “Where were you when JFK was assassinated? Where were you on 9/11?” led into “Where were you this morning?” So right off the bat, anyone who has not seen any advance info about this show is going to know – something big’s about to happen.

Tuesday, 6:30 a.m. Having asked “Where were you?” the first block shows us where (and who) our main players are. FBI Agent Erica Evans (Elizabeth Mitchell) awakens to her house shaking. She finds her son Tyler (Logan Huffman) is not in his bed and gets him on the cell, to find he’s in the ER, and barely feeling bad about it. This theme is going to play strong on this show – Erica wants to protect her son, but he’s not going to make it easy for her.

Newsman Chad Decker (Scott Wolf) is showering and heading into work. Ryan Nicholls (Morris Chestnut) is buying an engagement ring. Father Jack is opening the church doors. Val, Ryan’s girlfriend, is at home. It’s difficult to show simultaneous action on a TV show, and the pace felt a little off. We get a shaking water glass next to Erica right off the bat, but it’s several minutes before we see Val’s shaking coffee cup, FJ’s shaking light fixture, Ryan’s ring jumping around on the counter. Regardless, things start to shake, rattle and roll, and you can tell they’re not earthquake-savvy Californians – rather than run to the nearest doorway, Val seems to try to stop her bookshelves from falling over first.

In the street, Ryan does what so many of us have done since 9/11, what must be second-nature to New Yorkers by now – he looks to the sky to see what’s falling. The writers don’t disappoint – the fighter jet falling out of the sky gave me a lurch of déjà vu that was most unpleasant. Eight years later, and not even American, and I can recall the footage from 9/11 in a heartbeat. It brings a tear to my eye every time.

The giant Mother Ships darken the sky and all hell breaks loose. They could have saved some money by inserting footage from movies past – as one onscreen citizen put it, “This IS Independence Day.” And Deep Impact, and The Day After Tomorrow, and so many other running-from-the-end-of-the-world scenes. Conveniently placed TVs show newscasters reporting similar Mother Ships hovering over 29 major cities around the world.

The introduction of Visitors is very cool compared to the 1983 version (more on the comparison later). The bottom of the Mother Ships morphs into a giant movie-screen type thing. On the ground, we see Erica’s maternal “get behind my arm kid, I’ll protect you” gesture with Tyler. Erica’s a mother bear, through and through. And then, like a benevolent supreme being from on high, Anna’s smiling face gazes down on the planet.

It’s a bit early in the renewal season, but apparently there were no questions for Disney/ABC executives about the strengths of their current fall schedule. Nearly every show has already been renewed for this fall. Cast and producers for “Dancing With the Stars,” “Desperate Housewives,”… Read More »ABC sends early good news to 12 series, you’re renewed 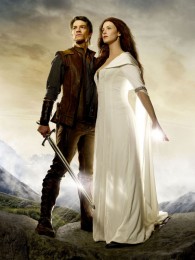