Editors Note: I’m republishing a series of posts written by my Aunt Linda seven years ago. In hosting me over my childhood summers in their Southern California homes, she and my Aunt Dorothea played a key role in nurturing my love of Disneyland (although they probably regret it now). This post was originally published on January 23, 2013 and updated on May 21, 2020. I will repost the series over the next two weeks in the hopes it brings back a little of the magic of Disneyland’s first decade. 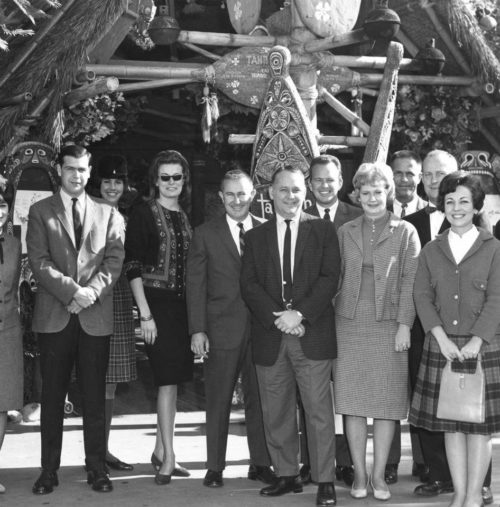 Members of the JWT Account team with Linda ( in the shades looking awesome ).

When I transferred from my job at Walt Disney Studios to take a low-level slot in the marketing department at Disneyland, I knew I was going to part of a “class act.” What Walt and his band of creators had put together in Anaheim was truly a Wonder of the World — back then.

At weekly staff meetings, the publicity department would report on the many requests for stories from international newspapers and TV and radio stations. We would learn that major corporations, like United Airlines and Monsanto, were pursuing joint product promotions with the corporations putting way more on the table than The Park. What is just par for the course at today’s Disney theme parks was brand-new at the time. The marketing opportunities were unique, ubiquitous, and they were golden.

Yet it took smart minds to invent those opportunities. Like every large enterprise, there were some inept managers and executives who seemed to just coast along, but the majority of men (and they were all men at that time) in the upper levels of management were pretty smart guys, all fiercely loyal to the brand, while internally, extremely competitive for Walt’s attention and favor.

Anyone who worked directly for a guy who was a member of the POC (the Park Operating Committee) was considered an insider. The POC met once a week and made the decisions that kept The Park at the top of its game.

We all knew we were working in a first-rate marketing environment. Further, we treasured every day, week, month and year, knowing how good it would look on our resume one day. That we had worked for Disneyland made every other experience on our resume look minor. And, as it turned out, it was true.

We had loads of fun, too. There was lots of drinking, rumor-mongering, affairs, and whispers. The Disneyland Hotel bar would be full of employees after 6 p.m. But most of all, it was just fun to be inside The Park. We would try to get out of our behind-the-scenes offices a couple of times day and be in The Park – even if it wasn’t open.

Strolling on a Monday through the closed park when it was quiet and sparkling clean was a joy. We would reach under the hooded popcorn machines on Main Street and grabs fistfuls of yesterday’s popcorn. Like Mary Poppins, we would feed the birds. Sitting on a bench in Frontierland, looking at Tom Sawyer’s Island on a sun-filled Southern California day became routine, but always delightful.

There was one side of working at The Park that wasn’t so nice. If you left to work elsewhere, you were considered a traitor, a snitch, a stealer of secrets. You would generally lose all of your Disneyland friends. It was quite a price to pay. Some did and never looked back; others failed which had all of us shaking our heads at such folly.