Wife took the kiddo to the Magic Kingdom for a haircut with Michal today and, of course, they snuck in a few attractions. While strolling around she snapped a few pics of some construction at the park.

The Crystal Palace is undergoing a major refurbishment. From the skylights to the sidewalk everything is getting a fresh coat of paint, at the very least. The facade was definitely showing some wear. So this is a good sign. 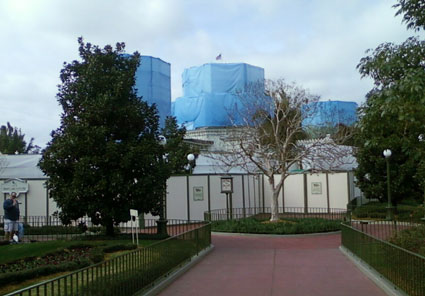 The castle moat and surrounding water ways have also been drained. Of note, the surveyors tool in the middle of the drained moat. I imagine they’re checking to make sure that everything is still level. I wonder if the Castle is sinking, not to start a rumor or anything. 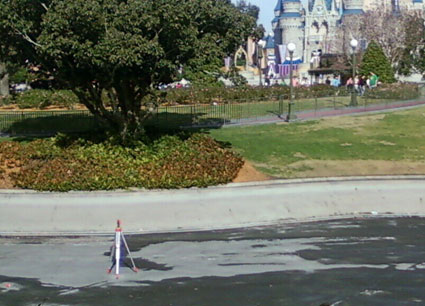 There does appear to be some work around the drawbridge area of the castle. It’s behind those curtains, covered up so we can’t see what’s going on. 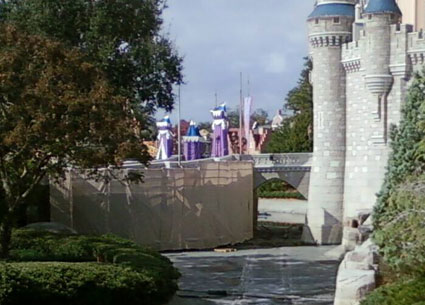 I’m hearing some very interesting rumors about projects at Walt Disney World. I can’t vouch for their 100% accuracy, but I thought I’d share none-the-less. At least one of these will forever change the way you experience the parks and resorts. There’s the recently posted… Read More »Big Rumors

Shanghaist reports on “Touch of the Panda” a new Disney-produced movie that is opening in China. It follows the story of a Panda Cub separated from its mother. Even if the plots not original it might be worth it for the scenery. The film was shot in the Woolong Giant Panda Nature Reserve.

Continuing our overseas trip, we have a story on a book of stories and anecdotes about Tokyo Disneyland that may have been plagiarized. Lawyers are now involved.

Two updated posts to note: First I’ve added a couple photos to my post about the new Green Disneyland Bakery; Second it turns out the Sherman Brothers documentary will open on May 22nd. Right now it’s at four cities, which I’ve added to the original post.

So far Orlando has been lucky enough to avoid a confirmed case of Swine Flu. If the cases continue to grow, that won’t happen forever, but it’s good news for now.

One of the juiciest rumors in the week of rumors that were this week, was the tidbit that GE and Universal Studios is giving serious consideration to buying the Busch Entertainment Theme parks, including (or perhaps only) the SeaWorld properties.

Looking for a great night on the town that’s also affordable? You may want to make another trip back to Downtown Disney to check out some deals. Not sure how long these specials will last, so ask when making reservations. Look below the cut for details:

Pixar Icon to be next Living Character Initiative at DHS?

Welcome Texans! But Sorry, No Disney Park For You.

I’m suddenly getting tons of traffic from a story in the Dallas News rehashing the rumors of the Walt Disney Company building a new theme park on a plot of land it supposedly owns north of Dallas, Texas. I have to say, don’t get your… Read More »Welcome Texans! But Sorry, No Disney Park For You.

The Myth of Main Street Marceline

Over the years I’ve heard many rumors and myths concerning Disneyland’s Main Street U.S.A. It’s the first land you enter and it sets the tone for the whole experience, so there is no doubt its crafting was carefully considered by Walt Disney. I have heard… Read More »The Myth of Main Street Marceline

I hope everyone enjoyed the Thanksgiving Day Holiday and the ensuing weekend. I enjoyed taking a few days away from the computer and burying my nose in a good book or two. The Twilight Series, that the movie that bested Bolt last weekend is based… Read More »Monday Morning Roundup – Disney News