I hope everyone enjoyed the Thanksgiving Day Holiday and the ensuing weekend. I enjoyed taking a few days away from the computer and burying my nose in a good book or two. The Twilight Series, that the movie that bested Bolt last weekend is based on, are not meaty by any means, but worth picking up if you like a good romance story colored with some Vampire lore.

Finally, I’ve listed a few more Disney collectibles from our personal collection on eBay. We’re very sad to have to part with them, but the extra income will really help right now. I particularly recommend this signed 1999 Lynn Haney Santa and Classic Pooh Figure. It’s a very small edition (25) and was only available at the Disneyland Christmas Merchandise event. Please do take a look and see if anything catches your fancy. 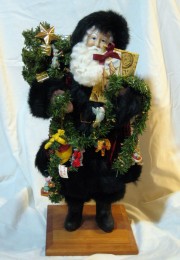