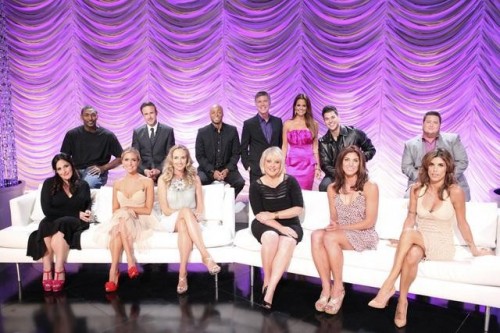 With the two-hour season premiere set for Monday, Sept 19 at 8pm ET on ABC, we’re finally getting our first look at the lineup of stars who will take to the dance floor. While I haven’t been the show’s biggest fan, I do see at least one name on the list I’m interested in following. Which is yours?

“Dancing with the Stars” returns with the promise of new surprises, plus all the elements viewers have come to know and love. “Macy’s Stars of Dance,” which features some of the best choreographers and performers from different styles of dance and offers viewers performances that represent the peak of achievement in their genres, will return on “Dancing with the Stars the Results Show.” One of the “Macy’s Stars of Dance” performances will be the popular “Design-a-Dance,” where fans have the chance to select their favorite professional dancers, dance styles, songs and costumes at www.abc.com. New this season will be “AT&T’s Spotlight Performance,” which features and celebrates people whose lives have been changed forever by dance.

Full Bios are below the jump:

It’s almost time for the fall shows to resume. Here’s a little Modern Family bit from behind the scenes of a Flash Mob scene. Love it!

Tigger gets down and does the Cat Daddy

Can someone remind me, if Goofy is a dog, then what is Tigger? All we know now is that Tigger is one cool cat. This video shot at Disneyland shows a couple of DJs from Arizona showing Tigger a few moves, then Tigger surprises them… Read More »Tigger gets down and does the Cat Daddy

Dancing with the Stars: Week 2 Performances

After a smashing season premiere, our Season 12 stars took to the ballroom for another round of performances before the ballroom renders its first cruel judgment of the year. Tonight they dance; tomorrow one couple is sent packing. So which of our stars shone the brightest?

Sugar Ray and Anna
Dance: Jive
Verdict: I think Sugar Ray is more of a classical ballroom guy, because while he looked like he was having fun – it was Your Uncle at a Wedding Fun, not Dancing with the Stars Fun. His feet weren’t pointed, he lost the timing in places … it needed to be a lot better.
Carrie Ann: “You’re such a fantastic showman.” – 6
Len: “I think you’re in jeopardy.” – 5
Bruno: “It needs more punch – in the feet.” – 6

Kendra and Louis
Dance: Quickstep
Verdict: Kendra had her first rehearsal cry for the season, but the dance turned out okay. It wasn’t quite as graceful or refined as it could have been, but Louis got her through it.
Carrie Ann: “I saw more that just the choreography […] Elegance is a state of mind.” – 7
Len: “Overall, I thought you did an excellent job.” – 6
Bruno: “You tried your best, but you were very, very tight.” -6

Remember that promotional ‘viral video‘ of a musical marriage proposal on Disneyland Main Street last year? It was pretty cool. But in the end it lacked verisimilitude. Here’s a wedding proposal that is the real thing. Swing kids Jeremy and Laura dance at Disneyland’s Carnation… Read More »Swing Couple Engaged at Disneyland

Dancing with the Stars: Week 1 Results

Two nights, four hours, and twenty ballroom dances later, the first results show of season 9 is here! Based on this week’s shows, I’d say the season is shaping up quite nicely – but alas, the ballroom is cruel, and two people are going home.… Read More »Dancing with the Stars: Week 1 Results

Yesterday just wasn’t enough. We need two more hours of dancing. Specifically, dancing… with the stars! Tonight is ladies’ night, and they want to make sure we know it. The show starts with a group number featuring the female professionals, to the tune of “She’s a Lady.” It’s like all the bad parts of Solid Gold, and none of the good.

Cut to Tom and Samantha up on the balcony, with Tom blathering about how great everything is, and Samantha staring a hole into the camera with soulless, vacant eyes. And now, the celebrities! Nobody falls down the stairs, so really it’s not worth recapping. Although just like last night, the trumpet player goes absolutely crazy with a solo as we pan down the row of celebs. Trumpet Guy is now my favorite member of the cast.

The ladies will be doing either the Salsa or Viennese Waltz for their individual dances, and the Cha-Cha-Cha and Fox Trot for the relay.

Debi Mazar & Maksim Chmerkovskiy: Debi tells us that she’s an actress who specializes in strong female roles. I hear she’s more than a little bit crazy. She’s tickled pink to work with Maks, and she proceeds to drive him nuts in rehearsal by never shutting up. They launch into their Salsa up on the little stage in front of the band, and the first part is just a bunch of sexy walking. Finally about halfway through they start doing something that looks vaguely like a Salsa, although it appears that Debi keeps forgetting the steps. They do some cool turns at the end, but I just don’t think the content was there. We go to the judges while Debi is gasping and heaving for breath. Len compliments her energy, but notes there’s a lot of work to do. Bruno loves how she works her “bazooms,” and he “got a lot of value out of that.” It’s the most complimentary pervy insult ever. Carrie Ann thinks she’s thinking too much. Then Maks pinches Bergeron’s tush, which is way hotter than Debi’s bazoom-shaking. The scores aren’t shocking: 6-5-5.