A couple early reviews of Disney’s upcoming animated feature BOLT! have begun to leak out. Obviously you’ll want to avoid them to remain spoiler free. But here are some summary thoughts. Jerry at CartoonBrew recommends you see it: I really enjoyed the film – especially… Read More »Bolt Previews have begun

Bolt Music Video – I Thought I Lost You

Here’s a little ‘duet’ between Miley Cyrus and John Travolta. I put duet in quotes because Travolta’s more of a backup singer, but he’s in the video. So hey. I think Disney is doing what it can to make sure Bolt is a hit. Releasing… Read More »Bolt Music Video – I Thought I Lost You

The soundtrack to BOLT is now available for pre-order with shipping for November 18th. It goes without saying that some spoiler type information is in the track titles. So skip the rest of this post if you want to remain totally spoiler free. Here’s the… Read More »BOLT! Soundtrack revealed

Over at Apple.com’s trailer site Disney Animation has released a new clip from the movie. This follows Penny and Bolt through an exciting chase scene from what appears to be the television series. I really like the effects work and seeing this in 3D is… Read More »Bolt! New Clip Released 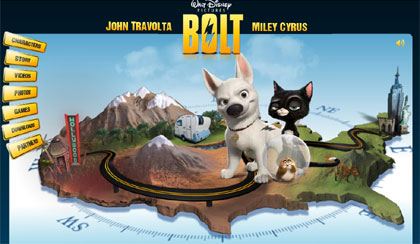 With the 800 pound gorilla that is Harry Potter out of the way, the pressure will be on BOLT to reign at the box office. Those who saw the whole film at the recent Walt Disney Studios press junket have been guardedly optimistic. Most said… Read More »Bolt: New Poster revealed as release nears