With the 800 pound gorilla that is Harry Potter out of the way, the pressure will be on BOLT to reign at the box office. Those who saw the whole film at the recent Walt Disney Studios press junket have been guardedly optimistic. Most said Disney has regained the heart that its last few films were missing. There is also more richness and better characterization in the film.

The November 21st opening is not that far away, so we’ll soon get a chance to see for ourselves. In the meantime we have to content ourselves with this newly revealed movie poster. 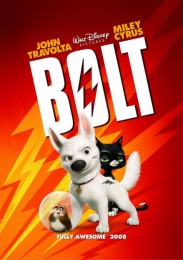 For super-dog BOLT (voice of John Travolta), every day is filled with adventure, danger and intrigue at least until the cameras stop rolling. When the star of a hit TV show is accidentally shipped from his Hollywood soundstage to New York City, he begins his biggest adventure yet a cross-country journey through the real world. Armed only with the delusions that all his amazing feats and powers are real, and with the help of two unlikely traveling companions: a jaded, abandoned housecat named Mittens (voice of Susie Essman) and a TV-obsessed hamster in a plastic ball named Rhino, Bolt discovers he doesnt need superpowers to be a hero.