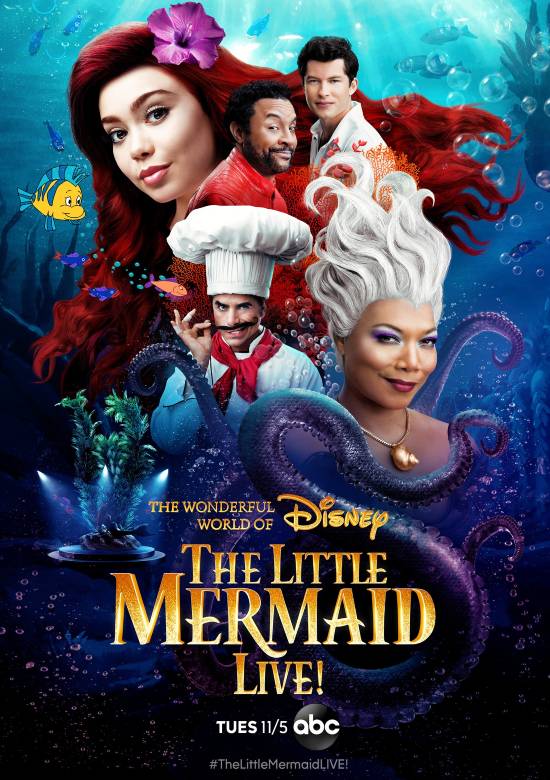 The classic tale of The Little Mermaid will soon be a live-TV event on Disney’s ABC Network. A new poster featuring the cast of the show has just been released ahead of the November 5th air-date at 8pm ET. Be sure to set your DVRs as you won’t want to miss this live performance.

The live production will feature 12 songs from the movie that will be blended with footage from the 1989 movie.

Here the cast talks about the production in special behind the scenes footage.

The cast includes Auli’i Cravalho (Moana) as Ariel, Queen Latifah as Ursula, Shaggy as Sebastian and Graham Phillips as Prince Eric. John Stamos will reprise his role as the eccentric French cook that he played in the Hollywood Bowl production of “The Little Mermaid.”

Both Stamos and Phillips will draw from their extensive stage experience, Stamos having made his Broadway debut in “How to Succeed in Business Without Really Trying,” before joining the casts of Tony Award-nominated “The Best Man,” and Tony Award-winning musicals “Nine” and “Cabaret,” among others. Phillips originated the role of Evan in Broadway’s “13.”

“The Wonderful World of Disney presents The Little Mermaid Live!” will honor the 30th anniversary of the beloved animated classic through a never-before-seen hybrid format that will take viewers on a magical adventure under the sea as live musical performances by a star-studded cast are interwoven into the broadcast of the original feature film.

This is not to be confused with live-action feature film version of The Little Mermaid that Walt Disney Studios will release. Lin-Manuel Miranda has joined Alan Menken to write new songs for that movie.