The EPCOT Experience preview center – a look inside 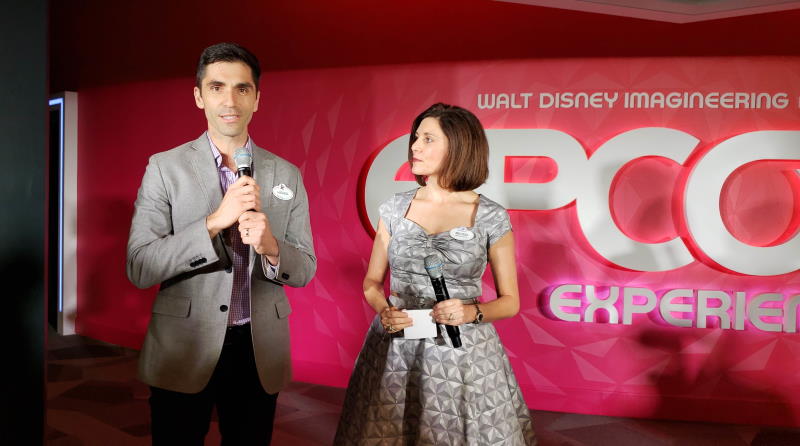 Although work has actually been going on for some time now, EPCOT is really at the very beginning stages of its major transformation. Last night, Disney invited the media in to meet with the park’s Vice President and officially open ‘The EPCOT Experience’ in the former location of The Odyssey center.

Joining Melissa Valiquette, the Vice President of EPCOT, was Imagineer and project executive producer Michael Hundgen. In the video below they introduce they talk briefly about the changes coming to EPCOT and introduce the new preview center. At the end, Hundgen also talks more about The Epcot Experience.

Inside the preview center is a representational model of new concepts and updated areas coming to EPCOT in the middle of a 360 degree movie experience. A version of this experience was on display at the D23 Expo, but this is much more involved with new animations for the movie and digital projections on the model

The film kicks off with a quote from Walt Disney’s video introducing the concept of EPCOT to the world, and then highlights concept art, music, and ideas behind many of the new or recently announced attractions and shows coming to EPCOT.

We did get video of the whole show, but it’s just a tease compared to being there in person as there’s no way to really capture how the 360 degree experience surrounds you in a 16:9 environment.

While this is an impressive overview of what’s to come, it does lack some of the details fans want to know (attraction names and opening dates to name a few). Part of the nature of a digital show like this is that Disney can update it and add in those details as time goes on. I’m looking forward to that.

Outside the show there are four photo opportunities representing some of the exciting changes coming to EPCOT and a handful of other exhibits.

I predict I’ll be spending a lot of time here checking out all the great concept art, enjoying the music, and exploring the exhibits between now and when this project wraps up. That might be years in the future as the scale of this transformation is quite big.

The only thing I’d change is add some sort of refreshment location in the lobby. I’d like to have a Coffee, Beer, or Ice Cream maybe while dreaming about the future of EPCOT.