EPCOT Forever fireworks kick off bridge to the future EPCOT 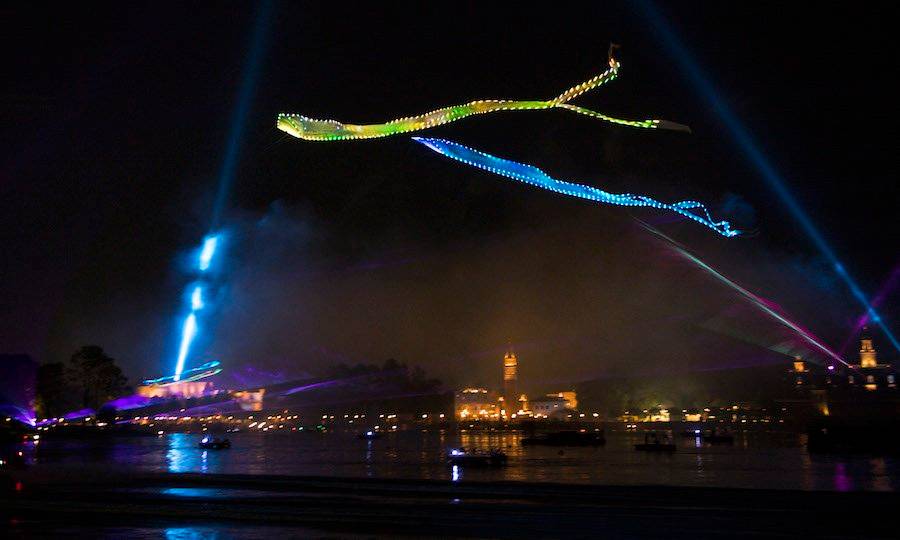 There’s a new fireworks show at EPCOT. The nighttime spectacular “EPCOT Forever” is a temporary replacement for Illuminations: Reflections of Earth, while the park gears up for HarmoniUS, a new show debuting sometime next year. While this isn’t one of Walt Disney World’s best fireworks displays, it is still pretty good by non-Disney standards.

It still takes place on the water and in the skies above World Showcase Lagoon. It features fireworks, lasers, and glowing pyrotechnic kites that are towed around the lagoon behind water jet-skis.

Watch our video of the first ever public showing:

My first visit to EPCOT was in 1997 and I just missed experiencing Horizons, which was ‘temporarily’ down when I visited, but that turned into a permanent closure after just a few more days of operation. My late arrival at Walt Disney World means, I was not exposed to most of EPCOT’s formative years.*

Because of that I didn’t really connect to much of the material used in EPCOT Forever, except as melodies I may have heard at some point or another and vaguely associate with EPCOT. The closer the show got to today, the more connected I felt with the music.

The last song is not an EPCOT song at all. Rather it was “A Whole New World” from Disney’s Aladdin. Either this signifies how EPCOT is beginning its transformation or how Disney stories and characters are taking over a park that once focused on futurism. Probably something from both columns.

Despite the disconnect I felt, I enjoyed the “EPCOT Forever” fireworks show. Disney did more than they had to in creating this show. There’s good fireworks, good lighting design around the world showcase, the kite sections are pretty neat, and even the music, which they recorded fresh for this show, was enjoyable. What the show lacked was something to tie it all together.

I don’t know if Disney’s master show creators will go back in and tweak a ‘bridge’ show, but I hope they do figure out some better transitions and a more connected finale.

I will be back to see “EPCOT Forever” again. I’d like to see it from a different location in the lagoon. Are you planning to watch “EPCOT Forever” on your next EPCOT visit?

*Except via the book that my parents who did visit EPCOT in 1984 brought home with them to torture me because I couldn’t go with them.

previousThe EPCOT Experience preview center – a look inside
nextMeet a new creature from Star Wars: The Rise of Skywalker and enter contest to attend its premiere