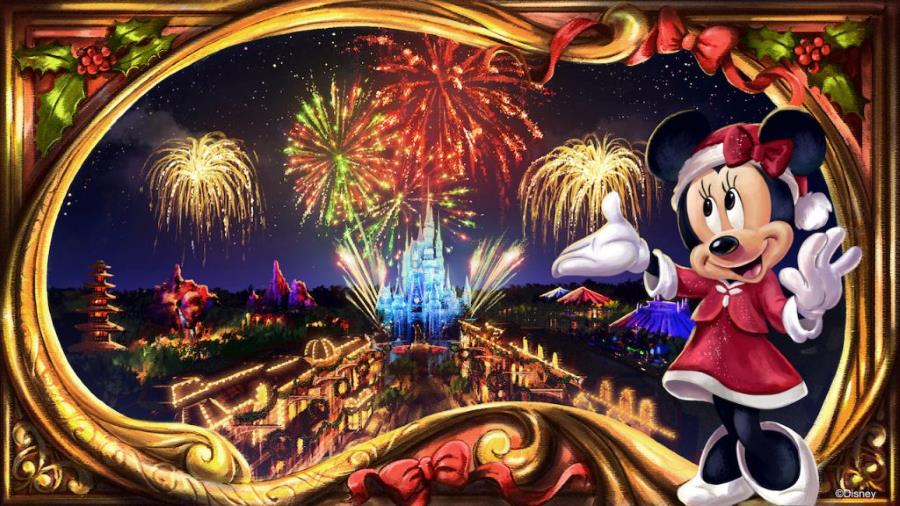 Summer just had its unofficial start at the Walt Disney World resort, but already eyes have turned toward cooler nights and the holiday fun of Mickey’s Very Merry Christmas Party. The skies above Magic Kingdom will sparkle with an all-new fireworks show this year as the introduces Minnie’s Wonderful Christmastime Fireworks.

Walt Disney World is importing one big feature for this show from Disneyland. You’ll be able to experience the fireworks show in different ways depending on where you are in the Magic Kingdom. While the main digital projection will be on Cinderella Castle, elements of the show will also happen in other parks of the park, including Main Street USA and Frontierland.

In theory, this helps spread out the crowds a bit from the very congested central plaza in front of Cinderella castle. That will remain the prime viewing area, though and recommended for first time viewers, which will be everyone this year.

According to Disney, “Minnie’s Wonderful Christmastime Fireworks show, hosted by the one-and-only Minnie Mouse, will celebrate the magic of Christmas with medleys of beloved holiday songs, from ‘Joy to the World’ and ‘Deck the Halls’ to ‘Up on the House Top’ and ‘We Wish You A Merry Christmas.'”

Sounds very festive and even a bit traditional.

Minnie’s Wonderful Christmastime Fireworks will be performed each of the 23 nights of Mickey’s Very Merry Christmas Party in 2019. While the firework show is new, other favorite entertainment is returning including Mickey’s Once Upon a Christmastime Parade, A Totally Tomorrowland Christmas and Mickey’s Most Merriest Celebration stage show.