The Walt Disney Studios has expanded to include the recent acquisition of the Fox film studios. With many more movies in production, this has required not unexpected changes to previously announced dates for films and a number of major additions. The new calendar has movies penciled in from now all the way through December 2027.

Three films move to later dates: Ad Astra (9/20/19), The New Mutants (4/3/20), and Artemis Fowl (5/29/20). While I’m sorry to see Artemis Fowl pushed back, it does move to a Summer opening date over Memorial Weekend. I’ll take that as a sign that Disney sees big things for the movie.

The Studios’ 2019 slate rounds out with Fox’s The Woman in the Window on Oct. 4 and Ford V. Ferrari on Nov. 15, Disney’s Maleficent: Mistress of Evil on Oct. 18 and Disney Animation’s Frozen 2 on Nov. 22, Star Wars: The Rise of Skywalker on Dec. 20, and Blue Sky Studios’ Spies in Disguise, moving from September to Christmas. Among early 2020 titles are Fox’s Underwater on Jan. 10, a Kingsman prequel movie on Feb. 14, and Call of the Wild on Feb. 21, followed by Pixar’s Onward on March 6 and Disney’s Mulan on March 27.

I realize Onward is animation and Mulan is live action, but it’s interesting how the shear volume of movies Disney has in production now requires it to put films that potentially share the same audience so close together. I would not be surprised to see either Onward and Mulan move dates again.

In the holiday corridor for 2020, Fox’s West Side Story adaptation, directed by Steven Spielberg, will debut Dec. 18 in the pre-Christmas slot, with Disney’s Cruella opening Wednesday, Dec. 23, for the long holiday weekend. Another example of Disney having two movies that are both expected to perform well at the box office practically right on top of each other.

“We’re excited to put in place a robust and diverse slate that lays the foundation of our long-term strategy, bringing together a breadth of films from Disney, Pixar, Marvel, Lucasfilm, Fox, Fox Searchlight, and Blue Sky Studios to create an extraordinary collection of cinematic experiences for audiences around the world,” said Cathleen Taff, President, Theatrical Distribution, Franchise Management, and Business & Audience Insights, The Walt Disney Studios. “With a strong summer already in place, we are eager to carry that momentum forward over the coming years thanks to a creative wellspring of bold and imaginative stories coming from our world-class studios – including several new chapters of two revered franchises, Avatar and Star Wars.”

Disney has announced it will push back its next Star Wars film until 2022 and the next Avatar movie until 2021. They’ll own Disney’s December slot in alternating years through 2027. Also note the Indiana Jones movie is slotted for Summer 2021. That’s something to look forward to in the meantime! 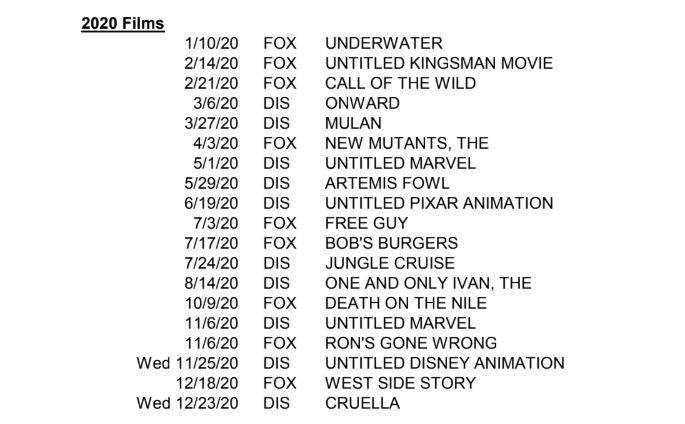 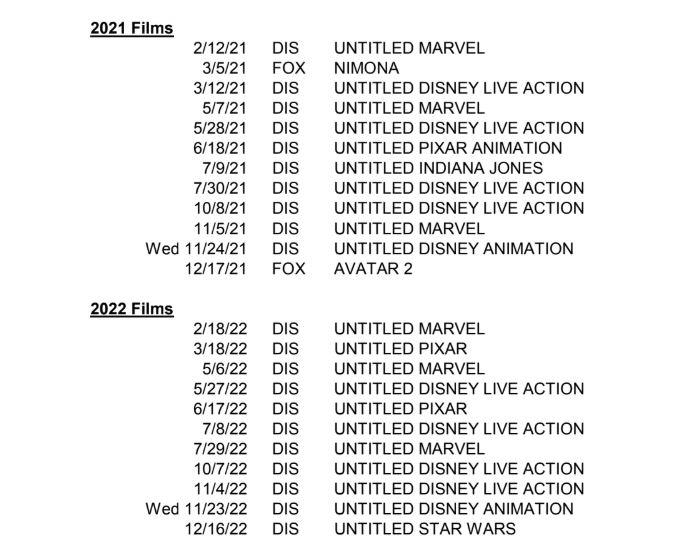 That’s a lot of movies to look forward to. I take this list beyond 2020 mostly as subject to change.