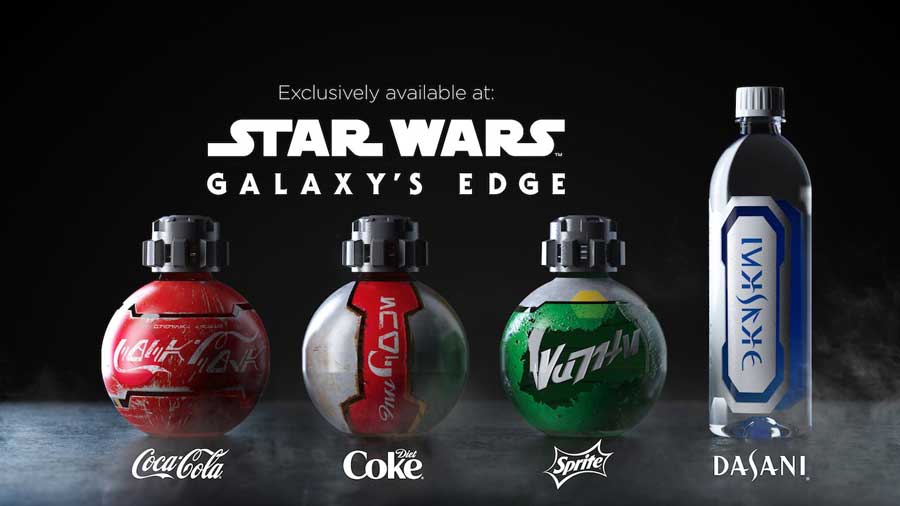 The strength of the Force in that galaxy far, far away will soon include the familiar flavors of Coca-Cola products. When Star Wars: Galaxy’s Edge opens up at Disneyland and Walt Disney World, you’ll be immersed in an experience unlike any other ever built and it will come with a world of flavors at the planned food and beverage locations. It will also include Coca-Cola products cleverly packaged to fit into the Star Wars stories.

Disney’s Imagineers partnered with Coca-Cola, and along with Lucasfilm Ltd. to design special Coca-Cola bottles that fit authentically within the Star Wars universe. The logos have been rendered in what looks like the Aurebesh alphabet of the Star Wars galaxy, which you can translate using your My Disney Experience app when you enter the land.

There is just enough other-worldly design here that you’ll stay immersed in the Star Wars galaxy of stories even though you’re enjoying one of your favorite icy-cold tasty beverages.

“We have a long history with Coca-Cola, dating back to the opening of Disneyland Park and the ‘Refreshment Corner’ on Main Street, U.S.A. in 1955,” said Scott Trowbridge, an executive at Walt Disney Imagineering in charge of the Star Wars portfolio at hte parks. “It’s a pleasure to continue to work with this amazing team on such a groundbreaking experience. These unique Coca-Cola products were created with storytelling in mind and are unlike anything we’ve done before.”

There was some debate about whether Disney would or wouldn’t stock Star Wars: Galaxy’s Edge with bottles and only serve soda at fountain drink stations with specially themed Star Wars cups. I think these themed bottles are a creative solution that will allow Disney to sell food at Outdoor Vending locations and bottled sodas and waters in stores.

It gets mighty hot and humid in Central Florida and even in Anaheim; a refreshing sugary soda beverage is sometimes just the thing. Will you try one of the Coca-Cola Star Wars bottles when you visit the planet Batuu and Black Spire Outpost?

Star Wars: Galaxy’s Edge opens on May 31 at Disneyland Park and August 29 at Disney’s Hollywood Studios!