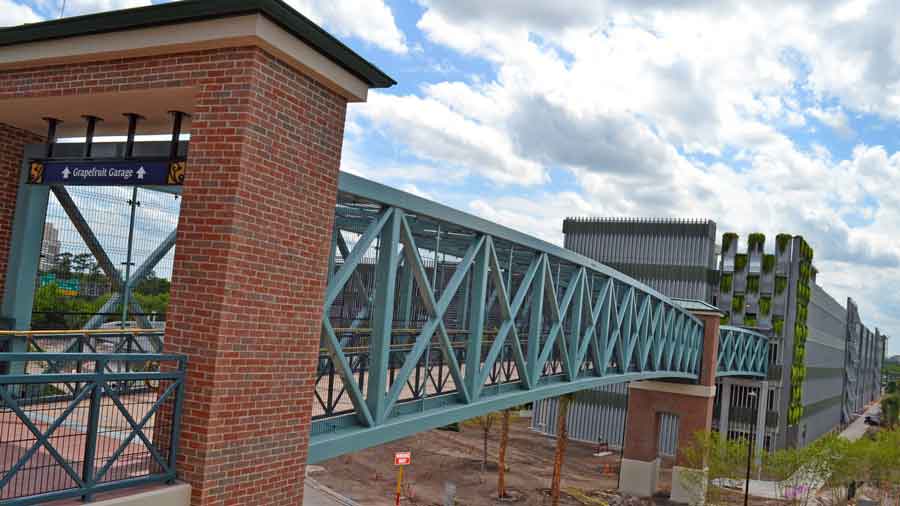 Disney Springs, Walt Disney World’s shopping, dining and entertainment complex has become more popular than ever since its expansion began in 2013. With recent openings including two new restaurants (Jaleo and Wolfgang Puck Bar & Grill) and future openings including a new Cirque Du Soliel show based on Disney characters, it’s bound to get even busier.

The four main districts of Disney Springs include: Marketplace, The Landing, Town Center, and Westside. They’re served by two main parking structures right now – Orange, which is on the Westside, and Lime, which is in Town Center. Now a third garage – Grapefruit – will deposit guests into the Marketplace area after crossing two pedestrian bridges.

The Marketplace side is rumored to be next in line for receiving some major upgrades. Perhaps some two-level shops allowing Disney to add even more shops and restaurants.

The grapefruit garage is definitely needed as the Orange and Lime garages have been known to reach capacity during busy season, especially around the holidays. It will also provide parking for Disney Springs cast members.

After a few construction delays, Disney Springs’ Grapefruit garage will finally open to guests on April 16.